We woke up and had another breakfast, but it wasn't very exciting. Then we got up and went back to the beach!

Here's a picture of a cute naked baby on the beach: 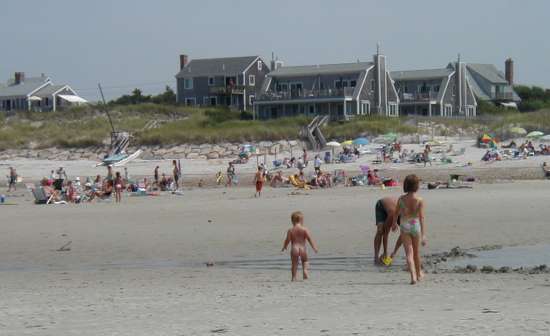 Notice also the houses that were on the beach. That part of the beach was, of course, private. If you look to the right by the colored umbrella, you can just see the entrance to the beach for us common folks. This picture was taken at low tide. During high tide, water would completely cover this area, up to the dark row of rocks you can see about 20 feet in front of the colored umbrella (NOT the big rocks in front of the houses). At those times, the beach could get kinda crowded.

And here's a shot, taken by Denise, that shows the intense amount of activity we were all doing while we were on the Dennis, MA beach: 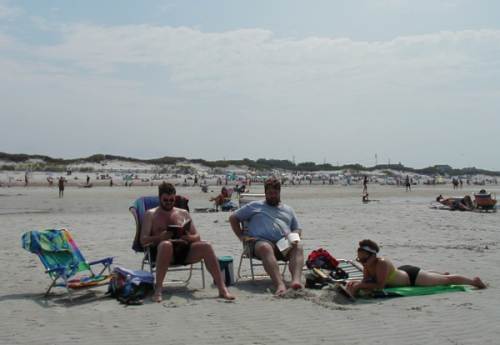 I'm reading my *Wonderful Contrivances* book (whoops … no I'm not … I'm reading Denise's book!), while Hilde is reading God knows what, and Barry is reading a tome entitled, *The Leadership Moment*. Hilde is laying on a boogie-board. Since none of us could ride the thing, that's what it was used for. Quite sensible, too, if you ask me.

Notice Denise's little beach chair next to me. Pretty cute!

Around 4 pm, Denise's cell phone rang. Michael and Deborah had arrived and were at the cottage. We got there, welcomed them, and then cleaned up to go out for dinner. They said they knew they were at the right place because of the laptop. I guess it's like marking my territory.

Deborah had been at the 27th annual Michigan Womyns Music Festival. She had flown into Boston from Michigan. Michael, her boyfriend, had taken the train from Newark, NJ, to Boston. Deborah's friend Alan picked them up and drove them out to the Cape. He was originally going to turn right around and go back, but he decided to spend the night. Nice guy. Good sense of humor. Worked at the Jewish Community Resource Center.

We decided to go to the Lobster Pound, in nearby Orleans, for dinner. Barry got an absolutely humongoid lobster, one that cost $40. Whoa. If you ordered lobster, you had to pick out which lobster you wanted from a rowboat set up in the front of the restaurant. Denise wasn't happy about that requirement, but she was pretty happy when her lobster showed up! 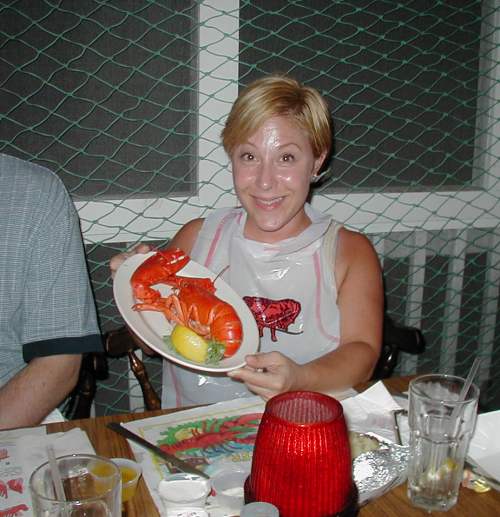 I didn't get lobster—I don't like the way they're killed, by being boiled alive. Our server had just gotten out of the Army—82nd Airborne, as in, don't mess with him—and he was super nice. Just a really nice, polite, well-muscled guy who could have killed me in the time I'd be cocking my fist back. He and Michael, who served five years in the Army during Desert Storm, had quite a bit to talk about.

It was quite a Motley Crue that we had for dinner. A group of folks that will never be together again. It's weird how that happens in life so often. People come together, eat, talk, and then go their separate ways.

For instance, five years ago, I ate dinner with Grant Weber, Alan November, and the woman Alan was dating at the time, a Canadian named Cindy. THAT group will never be together again. On my birthday about the same time, I had a dinner at Casa Gallardo with Jans, Rachael, Jane and Derek, Steve and Danielle, and some others (sorry if I can't remember at the moment!).

When I was in 8th grade or so—about 12 years old—my mother had a dinner for me. I could invite two pairs of adults, whoever I wanted. I chose my 6th grade history teacher Dot Harrison and her husband Bob (I still see them occasionally when I'm in Marshall … what great folks! … and what a great teacher!) and Vicar (a vicar is a pastor in training) Rogers at our Missouri Synod Lutheran church and his wife (this was the late 70s/early 80s, remember, so this was a pretty hip, cool vicar; in fact, he introduced me to the Who's *Tommy* and *Jesus Christ Superstar* by making me a cassette tape of both double albums, along with some of the first tracks from the Rolling Stones' *Hot Rocks* as filler, which I played over and over and over again). That was a great dinner. I don't remember the food, but I remember the conversation, and I remember how thankful I was to my mother for honoring me that way. In fact, I'm still thankful for it. I should thank her. Two big things happened at that dinner. First of all, as soon as dinner was over, while we were still at the dining room table, Mrs. Harrison leaned over to me and asked, 'Scott, what do you think of teachers smoking?' I was shocked—shocked!—that a teacher smoked, especially a teacher I loved that much. I mean, my Mom smoked, sure (she quit a year ago, I'm happy to report), but a teacher?! What could I say? I mumbled something inconsequential and meaningless, and she lit up. Wow. Then, when Vicar Rogers left, he gave me a list of great sci-fi I should check out. On the list was H. Rider Haggard's *King Solomon's Mines*. A few weeks later, I checked out one of Haggard's books from the Missouri Valley College library—not *King Solomon's Mines*—and thereby discovered the pleasures of an African adventure story written around 1900 or so. I went on to read several other of Haggard's works, and I still remember some of the other books he recommended: Stanislaw Lem's *Solaris* (which I bought just a few weeks ago) and Lord Dunsany. I carried that list for years. 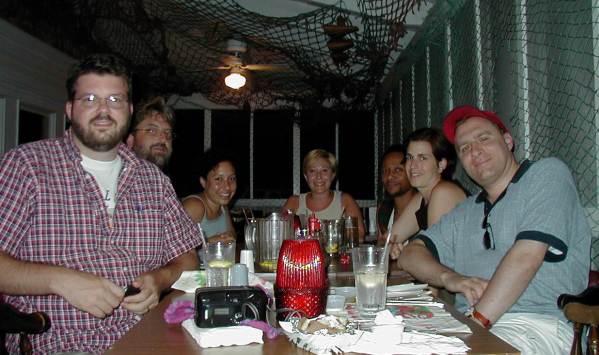 When we got back home, Deborah was tired, so she went to bed. Michael joined us as an observer for the now-obligatory game of Spades. We had a great time, but we were all tired, so we didn't play long. The boys won again, 256 to 127.

We did learn the history of how Hilde and Barry got together. They met in a poetry class at University of Missouri—St. Louis. They went out for coffee, and Barry wrote a poem about it which they read in class. It contained this line: 'I wonder how many licks it takes to get to her center'. That's a great line, one that I'm jealous of!

We went to bed.