We all woke up and ate breakfast together. Alan left early that morning, before anyone got up, since he had to get to work in Boston. Hilde made eggs and Barry made bacon. We're talking two large packages of bacon and 16 eggs! I certainly ate my share of eggs and toast, but no bacon for me, thanks. We ate on the screened-in porch and it was lovely and fun.

After that, we headed to the beach. Michael brought a football, and I was feelling athletic, so Hilde, Michael, Deborah and I threw it around (Deborah quit after about 15 minutes, though). Here's the proof. Hilde's on the left, running in her bikini, I'm in the middle in the black trunks, and Michael is on the right, behind the guy sitting in the chair.

Notice the football: it's the tiny colored blip behind Hilde about 10 feet or so. I think she missed it.

It was actually a blast throwing that football around. I hereby wish to publicly thank my good pal and adopted GranneBrother Darin Kerns for teaching me, at the tender age of about 28, how to throw a freaking football. Yes, before that, I threw like the proverbial girl. Now I can actually halfway look like I know what I'm doing when I toss around a nerf football. I impressed even myself on the beach that day. I was running, throwing, catching … all those crazy things.

At one point, I was running for the football and couldn't make it. I tripped, and I rolled into my fall, flipped completely end over end on the sand, and then jumped up. This is very weird. I am NOT athletic in any way. Just ask Darin! Or my brother. But I have some instinctive ability to fall forward and roll; in fact, I've done this many times on the tennis court. People always see me do it and expect that I've seriously injured myself, but I'm always fine; in fact, I think it's what prevents me from getting seriously injured.

Two little boys, about 6 or 7 years old, joined in after 10 minutes or so. It was fun playing with them. They didn't ask, and we didn't invite them. It was just one of those natural human interactions. We played for about 20 more minutes with them, and then Michael threw the ball, I missed the catch, and the ball hit the family jewels. By that point, sweat was streaming into my eyes—did I mention that it was again unseasonably hot?—so it seemed like a good time to sit down, recover, and then swim. Which I did. And the water felt lovely.

Even so, I still kept a careful eye out for anything that might want to taste me to see if I was good (I'm not … I'm bitter, and very bony).

We trudged back to the cottage late that afternoon. Hilde and Barry had to go back, unfortunately. I really missed them. They're great people, and they're quite fun to vacation with. I hope to see them again. Denise and Hilde said their goodbyes: 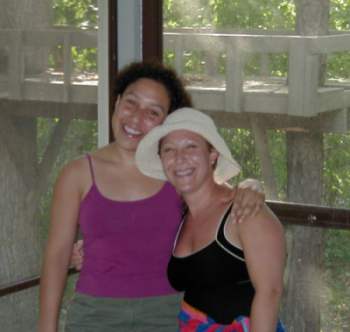 Yes, that is some sort of strange tree-house—or, rather, just a tree-platform—in the tree in the back yard of the cottage.

And I love Denise's hat. That is one cute hat!

Prior to leaving, Barry fell and twisted his ankle, causing him excruciating agonizing pain. Denise and Deborah assumed we were going to the hospital, it was so bad. But it turned out not to be broken, and they left, with Barry still grimacing. That poor man.

Deborah and Denise talked on the porch about ACLU stuff while Michael and I talked technology and blogs in the kitchen. I told Michael about blogs and explained how I thought one could come in handy on his Web site. He seemed intrigued. I hope he does it. I think it could be perfect for him.

We cooked dinner at home. The three omnivores had steak while I had scallops. After dinner, we were all pretty tired. So we went to bed early. We're gettin' old and boring.