Exciting news today: I finished my book, *Wondrous Contrivances: Technology at the Threshold*, by Merritt Ierley, at about 10:30 am. Quite good.

It was raining this morning. A light, cool rain. It was awesomely cool being in the cottage while it rained outside.

We had pancakes, courtesy of Michael, for breakfast. Deborah and I had a little fracas—we always have at least one minor one when we're together—but I'm glad to say that it ended quickly and we got along fine after that. She's very strong-willed, as am I, and she also enjoys looking for things I say that she can critique. This can be tiresome, but she's a good person nonetheless, so I just let it slide. Or rather, I spark up, and then I let it slide.

Michael and I discussed the finer points of getting an ass-whupping by your parents. He and I both received this brand of discipline when we were growing up. We both agree that we will not apply it to our kids, beyond a quick swat to the bottom if absolutely necessary. But no prolonged spankings.

Michael and I educated Denise and Deborah, who had never received spankings, in Spanking 101. We spent quite a bit of time on one particular devilish twist: when the parent tells you to go cut a switch that they're going to use to whup you. You can't come back with some twig, because that's just going to anger the parent, and then they're going to go get the switch, and it's not going to be good at all. Also, you don't want to get something really thin and pliable, 'cause those hurt like hell. And you don't want some limb-sized thing, an inch or more thick, because you're trying to get wood for a whuppin', not a beating. So you try to find something thick enough to distribute the pain but not so thick that it's own weight contributes to the punishment. But of course, the worst part is just having to go out there and find the means for your whuppin'. You're thinking about it the whole time, imagining what every piece of wood you find will feel like on your bare ass. Heck, by the time you get back, you're either already blubbering or steeled in your resolve not to show pain or tears. The latter was usually my attitude—not always, but usually—and it came in especially handy when I got spanked at school. Mrs. Malan spanked me so many times in 4th grade—in front of the rest of the class, no less—that I lost count. And then there was the famous paddling I received in 8th grade from the Middle School principal. But that's another story.

Before you get all freaked out and want to call the Division of Family Services on my parents, grandparents, or school, remember, this was the 70s, and in a small town. Things were done differently back then. My school wouldn't do that anymore, and I long ago forgave my family members for any pain they caused me, so it's all behind me now.

Besides, it toughened me. I have the toughest ass around! According to Denise, I actually had the ass whupped off of me. I am now, she says, sans ass. Which reminds me of a kid once at Crossroads, where I taught. She came up to me and said, 'You better head over to Lost and Found.' 'Why,' I asked. ''Cause your ass is misssing!' Ah, truer words were ne'er spoken …

We decided to drive into Provincetown, at the very tip of the Cape. It took over an hour—no surprise—and then we parked and begain walking around.

Michael and Deborah had never been to P-town, so it was all new to them. This was my eleventy-third time, I believe. I first visited P-town in 1984, when my brother and Mom and I went on a long visit to the east coast. As part of that long trip, we went to P-town. I loved the whole thing. Lobster. Ocean. Sand. History. Houses with more sand than grass in the yard. And crowds and crowds of people. I got more and more excited as we drove up highway 6 to P-town, and then we parked and were walking around. I'm sure my mouth was open in delight the whole time. I was just overwhelmed, and I loved every moment of it. My Mom was walking behind me muttering, 'This place is weird. It's just weird!' I was vociferously responding, 'No it isn't, Mom! This place isn't weird!', when we rounded the corner and a man was standing there in a lobster suit. Damn! Lost that argument!

One funny thing, looking back now. P-town is a VERY popular vacation spot for gays & lesbians, one of the top places in America, I would imagine. When I've been back the last several times, it's just so obvious. You'd have to be blind to miss it.

What? You mean a 16-year-old boy from a small town in the middle of Missouri with absolutely no experience with GLBT folks beyond the bs that everyone 'knew' and believed would be able to wander around a small town absolutely bursting at the seams with homosexuals and not know it?

After that first visit, I wanted to come back so bad. So I did again in 1994 with Rachael when we went on our big east coast trip (Washington DC, New York, P-town) and stayed there a week, and again in 1999 with Denise when we came to Boston so I could speak at an Alan November conference. And now I'm back.

We had a great time that day, walking around, eating, sightseeing, shopping, and people watching. At lunch, we discussed how much we hate smoking. Deborah and I were the most emphatic.

All in all, in was a grand time. Not everything is grand in P-town, however. One of the docks is crumbling, but dang it if it's not picturesque as hell.

Here's something else picturesque: a fishing boat. As in, a boat that actually works for a living. Not a pleasure boat, or a boat designed to carry tourists around to see whales or the harbor, but a boat that goes out every day, gathers fish from the ocean, and then sails back. 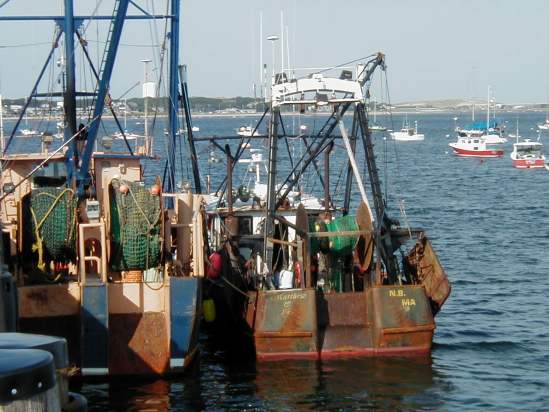 The fishing boat was on my left once we'd walked to the end of a long dock. When I turned to my right, I saw a bathtub's worth of sailing boats in the harbor, floating beautifully in the bright sunshine. 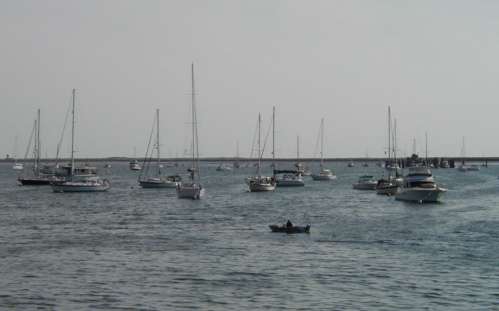 While we were in P-town walking about, we came across a crowd gathered around an artist hard at work. This isn't suprising in P-town. It's an artsy town, which is one of the main reasons it's fun (the GLBT population is another big reason). 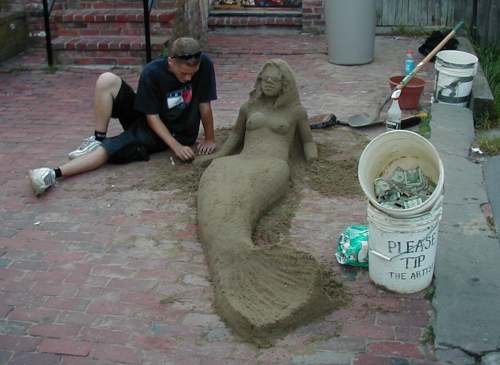 Every time I've come to P-town since 1994, I've always stopped by Shop Therapy. It may have been there in 1984, but I don't remember it. Shop Therapy has everything: bumper stickers, pins, hats, clothing, sex toys, tobacco supplies, knives, jewelry, and much, much more. There's a place in Columbia, Missouri that's a lot like Shop Therapy; it's called, appropriately enough, 'Cool Stuff', a name that describes Shop Therapy as well. 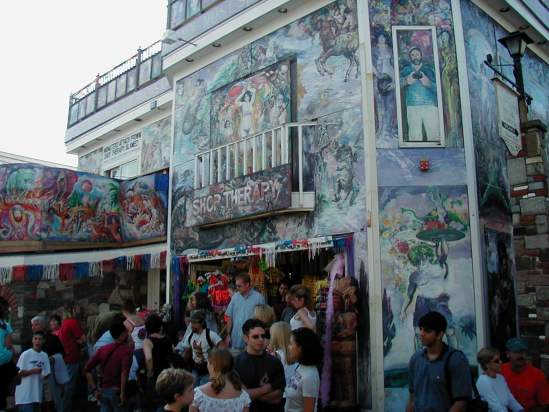 If you look at this picture, you can see just how crazy the scene is around Shop Therapy, and also how wacky the building itself strives to be. In fact, here's a detail of the roof area of the store. You probably can't tell it, but each of those panels is either a famous artist or a famous artistic work; the words going around the top of the building say, 'If art is to nourish the roots of our culture, xxxxxxxx'. Dammit, I can't see the rest!

And finally, the harbor at night, just after the moon has come up in its glory … one of my favorite pictures. 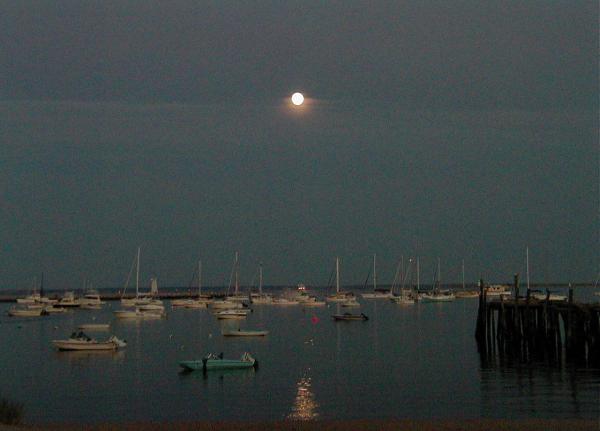 We left P-town late, driving to the sounds of jazz over the radio, and came home. All of us were tired. But did we go to bed? Nope. Instead, we all stayed up as Michael and I debated religion and politics and race. Now, I know that normally those topics help calm people down enough so that they go to bed easily, but that didn't work in our case. Michael and I had quite a discussion.

When we first met years ago, we disagreed about many things, but we both took it personally, and it was hard for us to like each other. There was a distance between us. But then I think we figured each other out, and now we genuinely enjoy debating each other. I like hearing his perspective, and I think he likes hearing mine. I think.

Anyway, it was late and time for sleep. So off to bed we went.