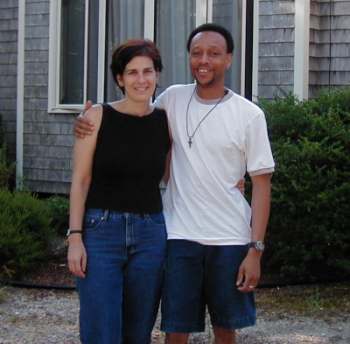 And before she left, Deborah posed with Denise. Something I said cracked Denise up. I love the look on her face. What a great smile, with an infectious laugh to go along with it! 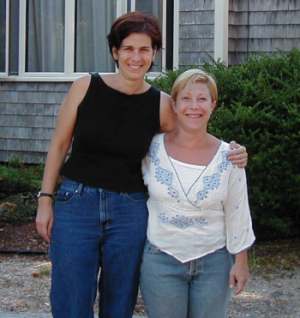 We had a great time with Deborah and Michael, and we were sorry to see them go. We dropped them off before 9:30 am, and then left to explore Hyannis. As Denise put it, 'I don't have to be anywhere at any particular time. So let's drive around!'

Hyannis is a charming town. And it was especially charming at 9:30 in the morning. I've noticed that most towns are strange places early in the morning, even if you're a native or know the town intimately. For instance, every once in a while I'll get up early and head over to the University City Loop to write in Starbucks. At 9 am, the Loop is an alien and different place. It's quiet, and everything seems slower and more deliberate. It reminds me of a movie set … hmmm … The Granneman Show? Could it be …

As we drove around, we saw the John F. Kennedy Memorial. Being good Democrats, we decided to stop and see it. It actually wasn't much, but it was simple, and very beautiful. It just wasn't elaborate. It was essentially a plaza, about 50 yards in diameter, with a stone wall at one end that contained an embossed bust of JFK. In the center of the plaza was a blue, clear fountain that sparkled in the early morning sun. Behind us was Hyannis harbor, which really sparkled that morning. 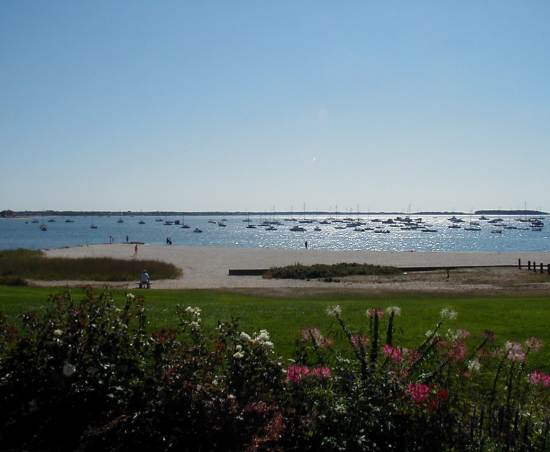 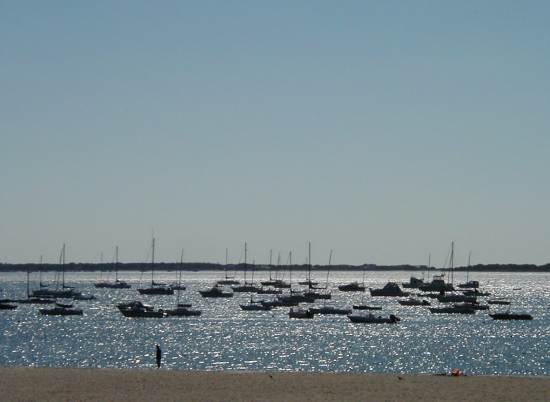 After driving a bit more around Hyannis, we decided to head back to the cottage in Dennis. Right outside of Dennis was a farm that advertised fresh vegetables. We'd driven by every day but hadn't stopped yet, and since this was our day just to do whatever the hell we wanted, we drove into the parking lot and stopped. The veggies were gorgeous, absolutely beautiful. We bought corn, tomatoes, peppers, and peaches. I almost dove in right there and started eating in the parking lot, but I remembered my sense of decorum. For 'sense of decorum' there you can substitute 'fear of a beating by Denise'!

While we were there in the store, a young woman came in, and in an odd accent, asked us if we'd like to go on the hayride. Hey, we're free spirits, so sure! We climbed into the bed of the trailer and sat on the bales of hay arranged in neat rows, along with the 15 or so others, many of them little kids. One little girl was frightened to tears by the thought of getting on the wagon, but up she went. And then we were off.

Now, I'll be honest. It wasn't much of a hayride. It lasted less than 15 minutes, and it basically consisted of a jaunt through the field next to the farmhouse. But it was fun, mainly because the little kids with us were spellbound. It's fun to be around little kids when they're amazed—they can't help but show it. Their mouths drop down and they just stare with complete abandon. Befuddled is what they are. 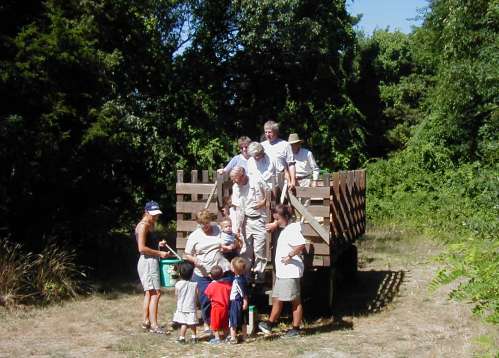 Interestingly, it turned out that the girl driving the tractor was from South Africa. Another woman who hung onto the back of the wagon and told us about the farm was from Bulgaria. The farm has been in use since 1681, and it's still in the same family. Amazing. Where the farm once grew vegetables and animals, it now supports itself by growing flowers. Other farms bring the vegetables to the store that they sell. The farmers have international students studying agriculture come live and work on the farm from April to December every year. Right now there are four, and they all live in the farmhouse that was built 300 years ago. That would be pretty neat.

After we got home, we of course went to the beach. By this time, things had finally cooled down on the Cape. A breeze, almost a wind, was blowing and the temperature was in the low 80s. I didn't go into the water, but I did read a lot. I started *Just For Fun: The Story of an Accidental Revolutionary*, the autobiograhy of Linux Torvalds, the inventor of Linux. What an easy book to read! If there was ever a beach book for nerds, this one is it.

That night Denise cooked the most wonderful dinner. And isn't the stove area totally cool? 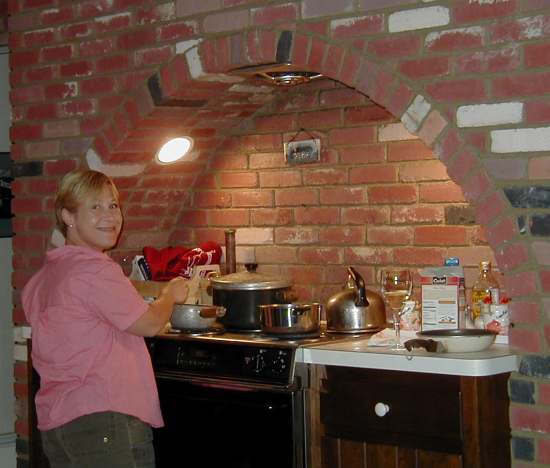 As for this dinner, I'm talking one of her 10 best. Mmmmm mmmm good. If you weren't there, you missed out. Fresh sea scallops from Chatham, MA and brocolli baked on top of rice pilaf with a lemon herb sauce and breadcrumbs. Just thinking about it makes my mouth water again. She also made a tasty salad with plump tomatoes, and then we also had the fresh corn on the cob we had purchased earlier that day. I have to rank that corn on the cob as one of the top 5 I've ever had, it was that good. Just tender and lucious. Yes, I know this is veering off dangerously close to food porn, but it was SO GOOD!

After dinner, Denise wanted to play Spades. I had to inform her that you really needed four for Spades, but I then offered to teach her a great game for two: Crazy Eights. I first learned it from my babysitter, Ms. Mamie Wilkes, when I was a wee one living at 1080 South Salt Pond in Marshall, MO. Gus and Mamie and I used to play it for hours. Teaching it to Denise, I thought about what a good game it is for introducing the idea of card stategy to kids. It's simple to learn, and it's mostly luck, but it contains enough basic strategy in it that even young children can begin to get the idea.

We played for about an hour, and had a great time. We didn't really keep score. We just sat on the screened-in back porch and enjoyed the sounds of the night, along with the sounds of our CD player and Vivaldi's *Four Seasons*, and played cards. A very nice close to our day.