Today we left the Saks' cottage in Dennis, MA, on Cape Cod. It was sad. We had a wonderful time there, and it was such a nice little place. After we cleaned and packed and made sure everything was in good shape, we both paused, with our arms around each other, and said goodbye to the house. 'Thanks, house. You've been great. We've treated you well. Hope to see you again!'

Yeah, we're dorks. But hey, there's nothing wrong with thanking something that's good to you. 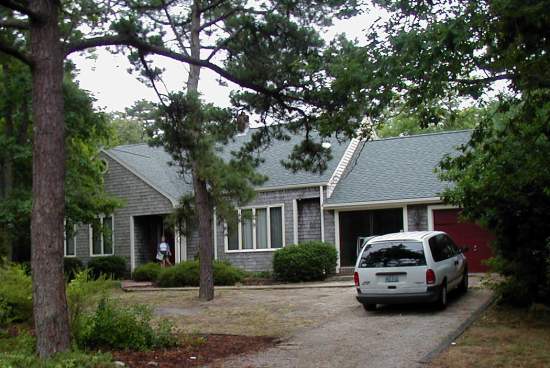 There's not a lot to report about this day. Basically, we left the cottage at 10:40 am and we arrived at the Bearces' house in Pittsburgh 14 hours later, at 1 am. We drove and drove and drove. Well, let me rephrase that. I drove the first four hours and Denise drove after that. She is Wonder Woman. The iron lady. The toughest little lawyer around. She deserves props for her accomplishment, and I am giving them to her here.

What really made it impressive was the weather. For most of Pennsylvania. we drove through fog and heavy rain. We were also taking Highway 80, not the PA Turnpike, so there were no lights along the highway. It was rough driving, and Denise did it with skill and aplomb.

The driving was beautiful, especially in New York in the Catskills. I'd like to come back just to explore that part of the state, as would Denise.

We arrived at David and Dana's late. The baby was up and was being cute as heck, crawling around like there was a race on. Before you think that David & Dana are in bed while they allow their infant to hang out downstairs, let me emphasize that they were awake as well! We chatted briefly and went to bed, tired tired tired.