We awoke in Las Vegas. David and Denise were a bit tired, since they had a late night gamblin' and drinkin', and I had a late night, since they were loud and talkative when they came in from gamblin' and drinkin'. However, we put ourselves together and checked out after eating the breakfast buffet at the Hotel San Remo (the buffet was fair, by the way … the scrambled eggs and french toast weren't bad, but the pre-made egg-and-cheese omelets were hard as rocks).

It took forever to escape Vegas. We started getting out of town at a good clip, but then we just stopped. Solid. We could see smoke belching up from behind a hill around a curve in the road ahead of us, but we didn't know exactly what was causing it. Several emergency vehicles raced past us on the median. People got out of their cars ahead of us and looked around, but it was already hot as hell, and no one could really see anything. To amuse ourselves, David and I made up dialogs for the people standing in the road, chatting with one another. David did a girl's voice, and I used my "old prospector" voice, basically modeled on Walter Brennan in John Wayne's great Rio Brave. Unfortunately, I can't repeat our dialog here, as this is a family journal, but trust me, it was funny.

Finally, after an hour, cars began to inch ahead. We rounded the curve, and finally saw the cause of the fire and the traffic jam: a burned bus. I said "burned", not "burning", because there was no more bus, just a frame. 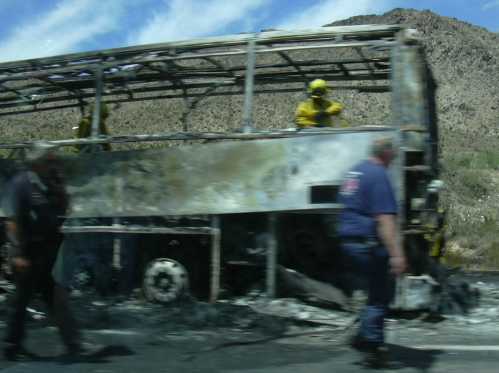 We proceeded to drive through the desert. This was finally real desert, with mostly sand and dirt and sparse vegetation. 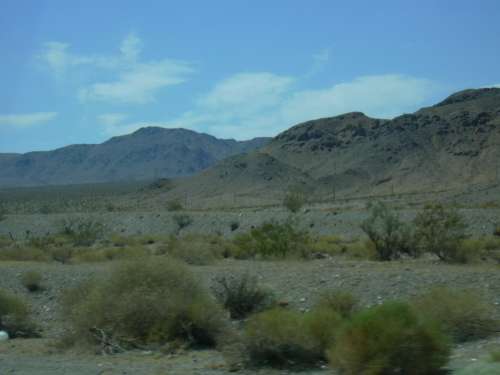 It was hours later when we finally hit Baker, California, the last outpost of civilization for quite a while. Baker is an interesting place for several reasons. Gas is about $2 per gallon, ice is $2.25 per bag, and a quart of oil is TEN FREAKING DOLLARS! If you use your credit card instead of cash, you must pay an additional $.50 fee. Uh-huh. Capitalism at its finest.

Another reason Baker is interesting: Bun Boy. That's right, Bun Boy. Of course, we all cracked up when we saw the signs. First there's the Bun Boy Motel. Oh, that name. 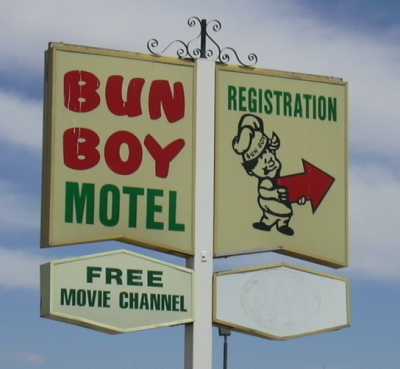 Next, there's the Bun Boy Restaurant. That was so classic that Denise and David had to pose with the sign. 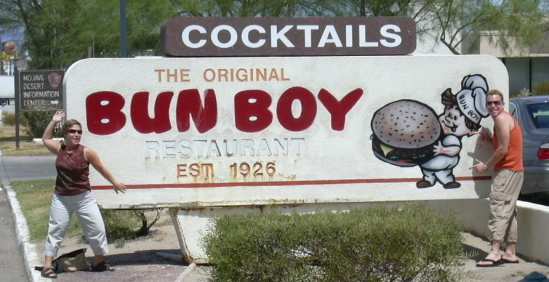 Why so much Bun Boy, you ask? Because we were in … Bun Boy Country! 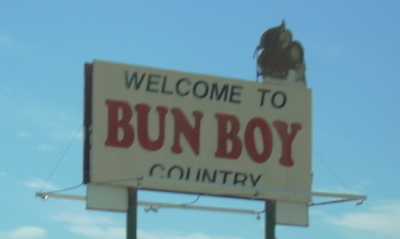 The final reason Baker is interesting is the restaurant that we ate at for lunch: The Mad Greek. It looked a bit like a dive, but it was excellent … and packed with people. They had Greek food—duh—and we all enjoyed it: David had the gyro, and Denise and I had the calamari salad, which was incredibly tasty. Highly recommended. 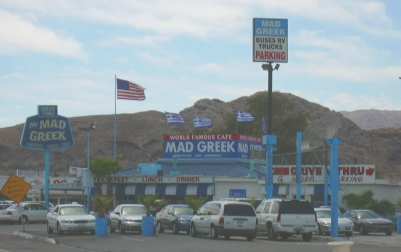 On and on we drove. Outside of LA, way outside of LA, we drove past one of the longest trains I've ever seen; in fact, it needed three locomotives, it was so long. It slid by in the distance, but it was still an awesome sight. I've always loved trains, and this one was majestic, charging its way across the desert on its journey. Well met, sir train, and good travels.

Finally! We're in L.A., as of 5:42 pm. Cars cars cars cars cars! Cars streaming by, neverending flow of cars on concrete rivers through massive towers of glass and concrete, color everywhere on buildings and signs and, yes, cars, and mountains sitting silent in the distance, a dark grey-blue sentinel wall around the city as cars stream by.

A catty moment, courtesy of David and I. There's a blonde girl ahead of us in a convertible.

We pull up next to her. It's not Britney, and the girl in the car is not exactly what one would call California svelte.

ME: No, I think that girl ate Britney Spears.

We reached TJ and Jay's apartment. Unfortunately, neither was there. Jay was getting a new car, and TJ had dropped him off and was on his way back home. He called us a couple of times to let us know where he was. In the meantime, we sat in the van and opened a bottle of wine and toasted our arrival in Los Angeles. When TJ finally pulled up in his car, got out, and walked up, he had to laugh when our first words were "Hey, how about a glass of wine!"

After enjoying another glass of wine and toasts, we grabbed our suitcases and traveling gear and took them into their apartment. We sat around talking until Jay got home with his new car, a Toyota Scion. These are new cars that are only available in California for the next year before Toyota releases them nationwide. Base price: $14,000! Jay is having several extras added, including A/C, power everything, special engine cooling, a spoiler, and more, which will raise the price to a still incredible $20,000. This is really a neat little car: it's kind of a car and a van at the same time, and the shape, though boxy, is unique and interesting. 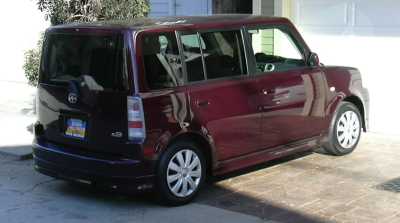 It was pretty cool riding in it. As Jay said, people often stopped and pointed and gawked. The car, in LA, is the ultimate celebrity.

For a housewarming gift, we gave TJ and Jay a nice handmade clay container for chips and salsa, some chips and salsa to try in out the clay, and a bottle of TJ's favorite tequila. TJ was thrilled. 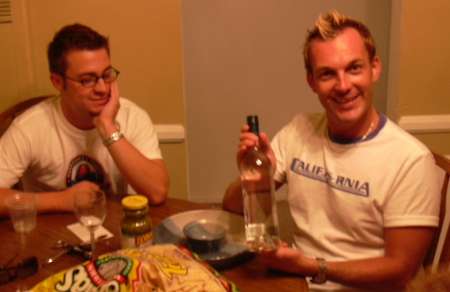 Finally it was time to eat. We all headed out to a sushi restaurant in West Hollywood named Sushi Maki. It was fabulous, of course. We all love sushi. I mean looooooooove sushi. I personally could eat it every day. Because we all love sushi, we ordered far too much, to the point where we were stuffed full. But it was so good!

We then got a tour of West Hollywood, which is a very gay-oriented area of LA. There were men everywhere, and rainbow flags, and bars, and it was very cool. It was a great area, and I liked it immediately. David was babbling the whole time about finding a husband.

We arrived home. David wanted to go out to bars and party, but the rest of us were tired. TJ and Jay headed off to their room, and David rested on the couch and was instantly asleep, while Denise and I took the floor. The hard, hard floor. The "even though we put down a thick comforter to lay on, it was still damn hard" floor. A fan buzzed and blew over us, and fewer and fewer cars drove past the open window next to us, and we slept.