I woke up at 6:36 a.m., and just could not get back to sleep. I tried for an hour, but it was useless. So I finally gave up and just continued reading my book.

David and Denise woke up soon. We had a simple breakfast: David bought muffins at Albertson's grocery store and Denise made coffee.

Afterwards, Denise worked on ACLU stuff while David and TJ went shopping and Jay ran an errand involving his cell phone. I finished Newman's Anno Dracula and picked up Neil Gaiman's Coraline, a dark children's fantasy that is just as creepy for adults. Gaiman is a friggin' genius, and I enjoy every single comic book he writes (every single one!), so I was expecting to like one of his novels as well. And I did. It was a simple story that displayed all of the story invention for which Gaiman is famous.

I whipped though its 150 pages in a couple of hours, and then selected for my next book a novel that I am almost embarassed to say I've never read: William Gibson's Neuromancer, first published in 1983. Yes, the book that introduced the word "cyberspace" into our vocabulary, the book that envisioned the Internet as an imaginary matrix of data and information that so-called "cowboys" can navigate using special equipment jacked directly into their minds. The writing style is film noir crossed with a technical manual and incorporating quasi-mystical visions, futuristic slang, and a bit of a travelogue. It's great.

David and TJ came back home, and we all packed up and went to the local mall for lunch. There was a food court with a huge selection of every kind of food, so all had our pick. We ate outside under an overhang that unfortunately made us hotter. During dinner, David told us about his parents.

"When it comes to our yard, my parents are simple. Mom likes circles, and Dad likes squares. It's easier to mow, according to him. So there's this constant battle in the yard. Mom creates a circle. And then Dad complains. 'It should be a square! I've got to mow it!' If he does anything to the yard, it's a neat square. He'd be hapy if the whole yard was just one big square, with a big square house in the middle.

Last year, Mom put in a nice little swimming pool in the middle of the back yard. It was the cutest little pool! Of course, it was a circle. The next day, Dad put up a little wooden wall around her pool. It was a square. Of course."

Jay finally joined us, ultimately unsuccessful with his cell phone errand. He ate, and then we all got in TJ's car and drove to Hollywood proper. Along the way, we passed Larry Flynt's building. Wow … the publisher of Hustler. That should tell you right there that Hollywood is one classy place! 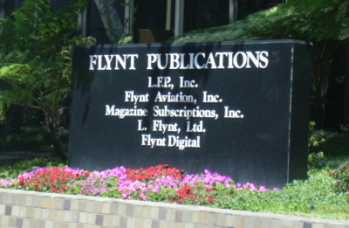 Also in Hollywood is the Ripley's Believe It or Not museum. We didn't go in, but it's a pretty cool building. The dinosaur biting the clock is a nice touch. 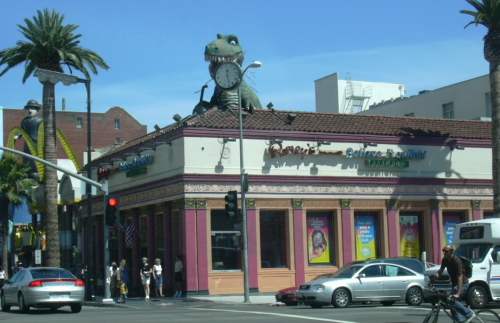 We finally got out and joined the enormous throng of people in front of the famous Mann's Chinese Theater. In front of the theater are concrete blocks where various celebrities have impressed their hands and shoes in the wet concrete, and then signed their names and dated the impression. There were a lot of famous actors there, both older and newer. For instance, Jack Nicholson was present, for Chinatown, I believe: 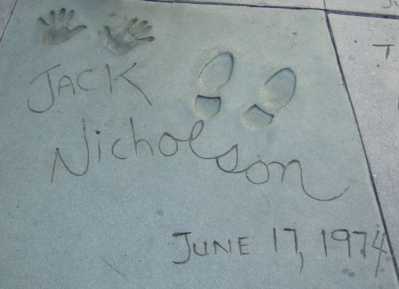 One of my all-time favorite actors ever was also present: the great James Stewart. 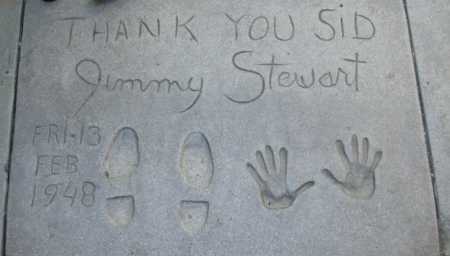 We were with TJ and David and Jay, so you know they were looking for Judy Garland's impression. We found it, and Denise bent down to compare her hands to Judy's. Remember, Judy Garland was only 4 feet, 11 inches, so Denise and Judy were pretty close in hand and foot size. 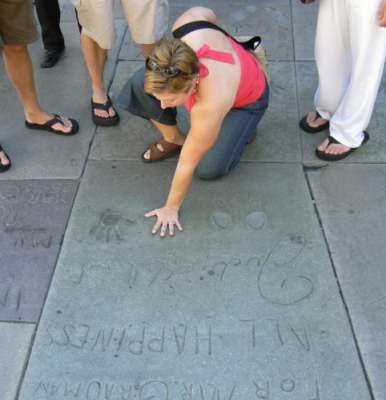 Continuing the theme of little women, we walked around the corner so we could see the famous Hollywood sign. On the ground were all of these "testimonials" from Hollywood folk; surprisingly, many of them were not exactly positive about this town and its industry. Denise found one that seemed apropos.

We finally found the HOLLYWOOD sign. Denise and I posed below it in a "theatrical" pose; unfortunately, you really have to work to see the silly sign over my head!

After me, Denise posed with her truly fabulous retinue! Take that, Hollywood!

On our way back to the car, we passed actors dressed up as various characters from the movies. We saw Superman, an Imperial Stormtrooper from Star Wars, Neo from The Matrix, and some poor bastard wearing a skin-tight black Batman suit on a very hot day. The most stunning individual was dressed as a demon. I'm not sure what movie he was from, but he certainly memorable. Especially the gold loincloth. Eeek. 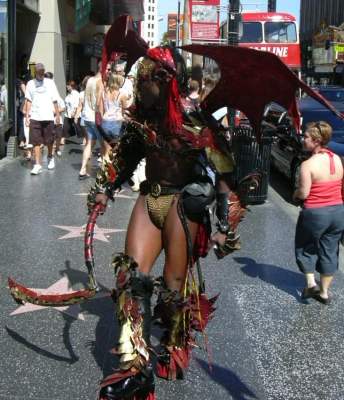 We left Hollywood and headed back to the Santa Monica beach. We sunned ourselves, and I read more of Neuromancer. After it got dark, we headed back to TJ and Jay's. Jay's boss (named Scott) was gone for the night, and he wanted Jay to housesit for him at his brand new, way cool, very expensive house in Venice, one of the more exclusive areas of L.A. The plan was for us to pack up all our things back into the van and follow TJ and Jay over to Scott's house. We would buy groceries, cook dinner, hang out, sit in the hot tub drinking wine, and in general enjoy ourselves. Then, in the morning, TJ would come with David, Denise, and I as we drove up to San Francisco. After a few days, he would fly back to L.A. as the three of us continued on our trip, heading outside of California and ultimately back home.

We were going to purchase some groceries, but instead we called in an order for Thai food. It was getting late, and we were hungry. We picked up the Thai and made our way to Venice.

I didn't know this, but there really are canals in Venice, hence the name. In order to drive over the canals, you must slowly go over a concrete bridge, rising steep and sudden from the road you're on. This is in a subdivision, by the way, so you're already driving slowly. We went over a couple of cute little bridges, each maybe 30 feet in length, and then turned down an alley. We pulled up in front of a nice house, parked, and got out.

We got a tour of the house, and it was in fact gorgeous. Jay's boss and his husband just moved in a few weeks ago after finishing the construction of the home, but they'd already done a lot of work, and it was coming along nicely.

I'd like to tell you more, but by this point I was exhausted. I ate my Thai food outside with everyone else, almost gagging from the heat of the spices, and then we made our way inside to watch some TV and talk. Within 15 minutes, I was nodding on the couch while everyone else talked. I got up and made my way to bed. The sleep was badly needed. I later found out that everyone else did enjoy drinks in the hot tub. Ah well … when your body says it's time for sleep, you listen.