I awoke around 7 a.m. again. I don't know whether I'm angry or happy about the two-hour time difference I'm experiencing here in California. On the one hand, it's kind of nice that I'm waking up so early. On the other hand, it sucks that I'm getting so tired early at night. I know! Amphetamines! (To any law enforcement personnel reading this: I'm kidding.)

Denise awoke shortly aferward, so we showered and dressed and waited for everyone else to get ready. While we waited, we decided to walk around the canals that we hadn't been able to see last night in the dark.

Really. It was awesomely cool. The houses were cute, the plants were thick and plentiful, and the water of the canal made it hard to realize that you were in Los Angeles. There were ducks everywhere, swimming and waddling and squawking in the morning light. 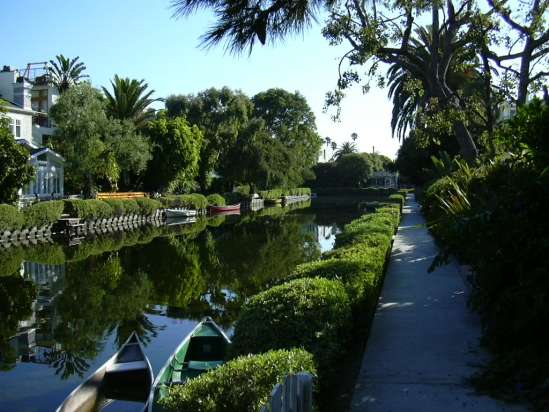 Everywhere you looked, it was beautiful. 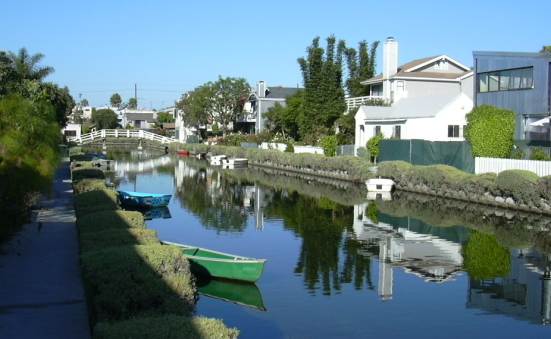 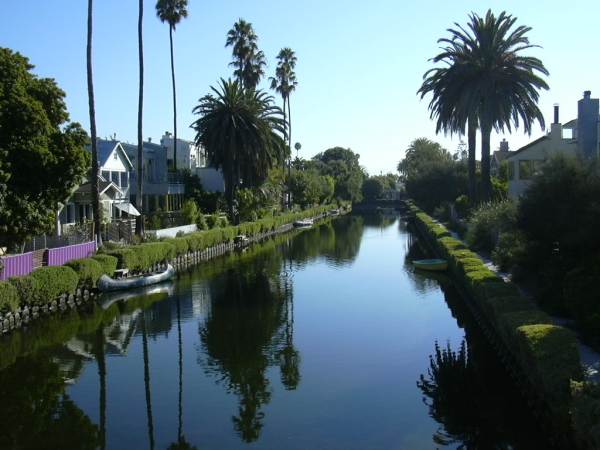 Even the bridges were nice, the same bridges we'd driven over the night before, but now glowing in the morning light, like works of art. 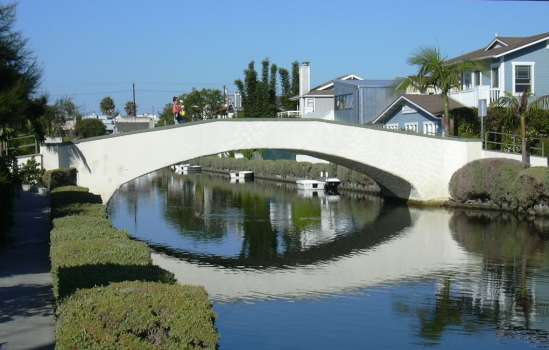 Of course, reality always intrudes, even in what appears to be paradise. Walk quickly past that house! 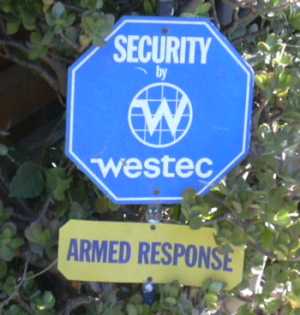 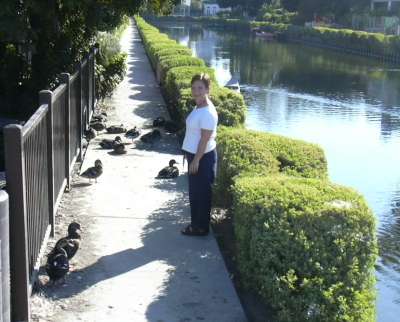 One of the nicest things I saw: a tranquil scene, serene and calm. 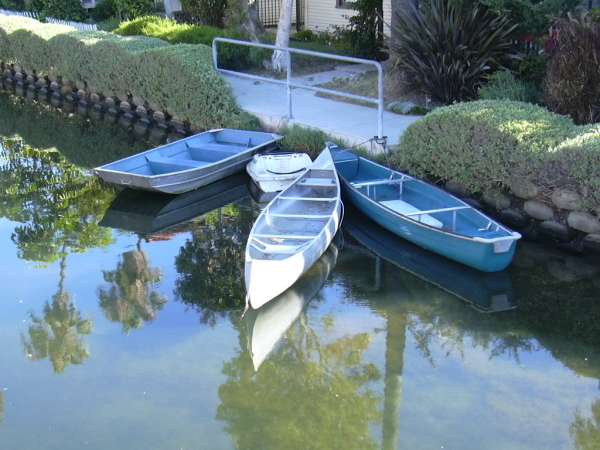 Of course, there are trees thickly lining the edges of the canal, providing shade for the people and homes for birds and other animals. It was noisy during the morning, but it wasn't city noise. It was the noise of ripples forming in the water, and ducks, and birds and insects singing. 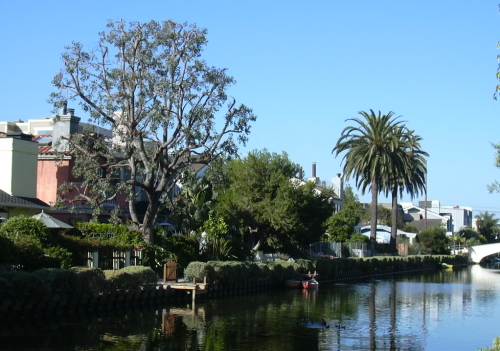 There were gorgeous homes all along the canal. Too many to photograph them all. But a couple caught my eye, this one in particular. Can you imagine walking out on that balcony early in the morning, with a warm cup of coffee in your hand, the sun shining, reflected in the water below you, ducks lazily paddling by, greeting you with a hearty squawk? 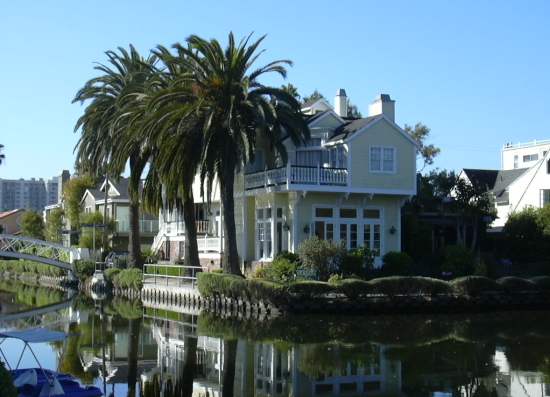 This is the house we stayed in, taken from across the canal. Nice, eh? David is out in back, enjoying the morning. 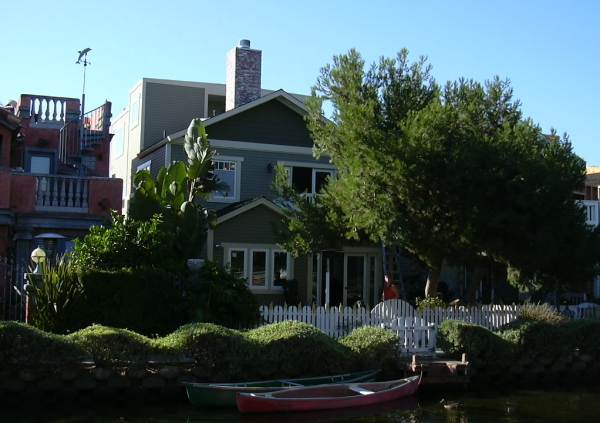 We left Scott's house around 9 a.m., but we had to stop back at TJ's because David left some things at his house. Ah, that Dramamine! We got everything, and we finally were on our way!

Along the way, we saw some of the pretty farmland that California is famous for.

After a few hours, we stopped for some lunch at Dino's Deli. The food was tasty, and we had a good conversation while we ate. Somehow we got on the subject of people who eat a lot of food, an enormous amount of food, and TJ told us this story about himself.

But what makes it all the worse was that I am lactose intolerant, so I was in a substantial amount of pain eating all that ice cream. I was in a lot of pain. It was not a good thing." 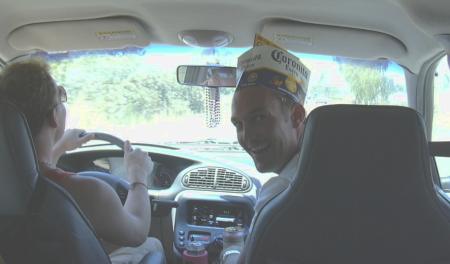 We continued on our drive up Highway 101. We did not want to take Highway 1 up the entire route, even though it is the most beautiful way, because it is slow going. However, around Monterey, we did drive over to Highway One so we could enjoy the spectacular views on the way to San Francisco. Unfortunately, it was here that the batteries in my camera decided to die, so I only got a few shots of the drive up that spectacular road, and only one worth displaying here. 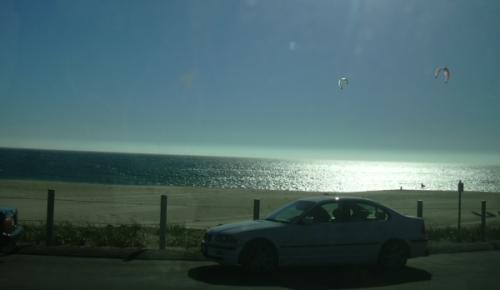 Their house is darling, with a view of the Bay from their enormous back window that is simply stunning. 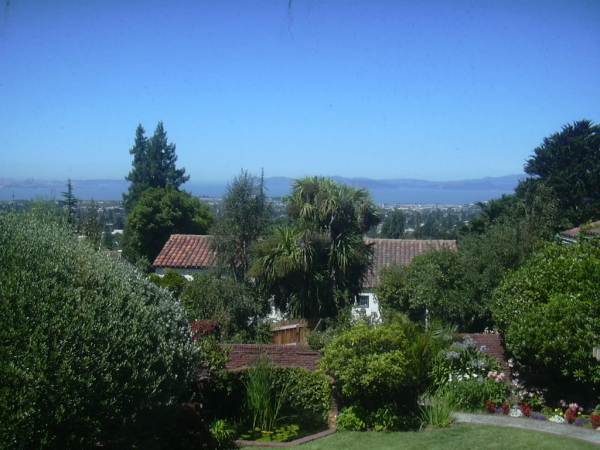 They also have a back yard that is cute as can be. They've got a lemon tree in it, and beautiful flowers, and other flowering trees that provide them with more fruits than they could ever possibly eat. It's not a big yard by St. Louis standards, but it is beautiful and plentiful. 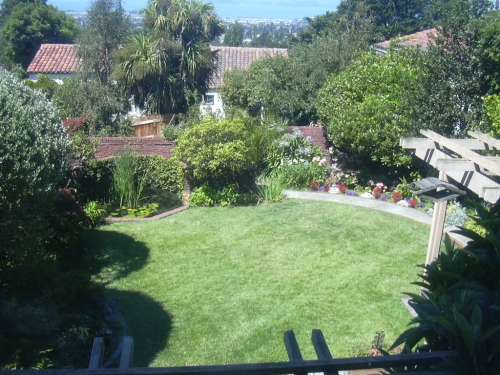 We ate dinner with Moe and Grace and had a great time discussing politics and law. When we were done eating, it was already past eleven, but TJ wanted to take us out. Moe and Grace live very close to Berkeley's campus, and TJ knew this great little bar, and he wanted to guide us there. So we all changed clothes from shorts to pants—after all, San Francisco is cold at night, right? even in summer, right?—and we met outside. Now, it was dark when we started this little journey, but here is the view down the street directly in front of Moe and Grace's home: 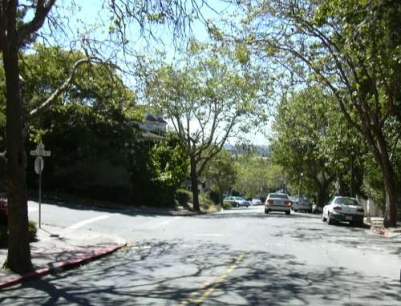 Notice how the street just kind of goes rushing down immediately before completely dropping off into nothingness? Like a sheer precipace? I was kind of worried about this walk, and I sensed the slightest hint of trepidation in David's voice, but TJ assured us—ASSURED US, mind you!—that it was just a few blocks away. Just a short little walk. A jaunty little hop, skip, & a jump. La, dee dee, dee da.

I immediately began to worry when I felt like I was climbing down a ladder the further I walked away from Moe & Grace's. Soon I realized that instead of climbing down a ladder, I was in fact descending into the pits of Hell, and TJ was Satan himself, the tormentor, the evil one, intent on torturing us all until we were left broken shells of humanity, weak and unable to continue any longer.

"We're almost there!", TJ would again announce, and what was the worst thing is that we would believe him. We would believe him! "OK, TJ! OK!", we would all puff, following along like brainwashed prisoners in a new Bataan Death March. And then the whole process would begin again. "Oh, hmmm, it's not here …", TJ would mutter. Soon it became obvious that TJ was just trying to destroy us as part of a sick game that only he could truly comprehend. And I was so glad I was wearing pants on what was perhaps the warmest night in San Francisco's history. I loved the hot feeling of stickiness on my legs as the sweat melted my jeans to my thighs. And then we finally made it! We made it! The bar was ahead! We were saved! YES!

And it was closed.

I'm not going to believe that. I know the truth. TJ is evil, one of Satan's minions, and he must be stopped. I will get my revenge. Just as soon as my thigh muscles stop quivering, and the blisters on my feet heal, and my toes return to their normal shape. I will get my revenge. Maybe I'll make him wear clothes that don't match, or I'll force him to listen to music that has guitars in it and is played at mid-tempo, or I'll part his hair on the side. Something just as diabolical as what he did to us.

I don't really remember the walk back. I vaguely remember gasping and crawling on my hands and knees up hills the size of Mount Everest, glad I was finally back at Moe & Grace's home. I dragged myself into bed. I slept the innocent sleep of a man who just conquered the temptations of the evil one.