Denise was playing the slavedriver, so she woke us a little after 7 a.m. so we could get in the van and drive drive drive. Today was to be our longest day in the van, and there's nothing like driving until you're delirious when you've only had a little over 4 hours of sleep. But Denise said we must arise, so arise we did, trying our best to avoid the whip.

We walked outside and finally saw the motel that we had driven to only a few hours before. Oh, so THIS is where we stayed! 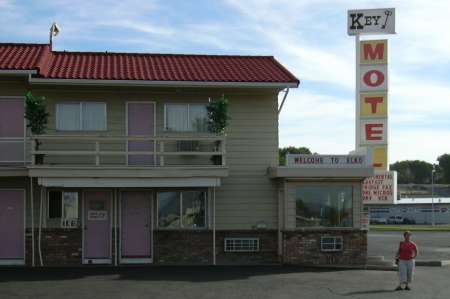 As we were getting ready to leave, I looked in the sky and noticed some awesome clouds. I realize this must sound like a theme: look up, see clouds. But the sky really is amazing out west, and the clouds are part of that magic. And that morning, when I was tired as could be, the clouds gave me just the energy I needed to get going for the day. 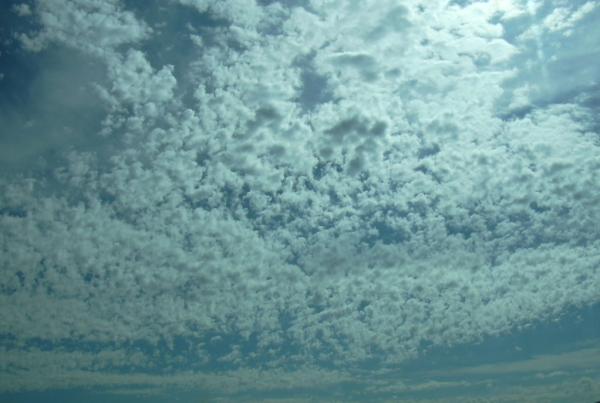 We got some food at McDonalds and some lattes and espresso at a drive-through coffee stand. It was actually very good coffee, believe it or not. As we headed out of town, we once again saw beautiful mountains and sky stretched out before us. 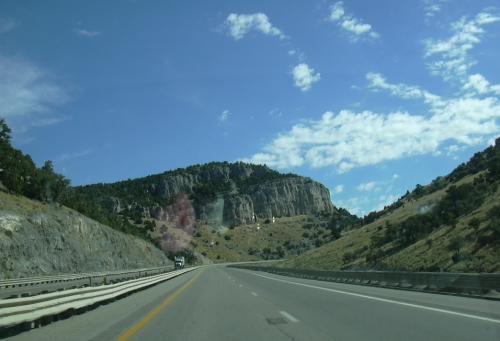 The drive seemed to go on forever. I drove us the first leg, to Salt Lake City. We wanted to see the center of the Mormon, or LDS (Latter-Day Saints), religion. As we got closer to Salt Lake City, we began to see the natural origins of the name of the city: the salt flats. All of a sudden, there were white stretches of salt on both sides of the car, lending an eerie look to the landscape.

We arrived in Salt Lake City, and it is obviously dominated by the LDS church, as the main roads in town have the word "temple" in them. We parked close by the main LDS temple, the center of the LDS church in the entire world, and got out. The temple is enormous. It took 40 years to build it in the 1800s, and although I have seen other LDS temples, I've never seen one like that. 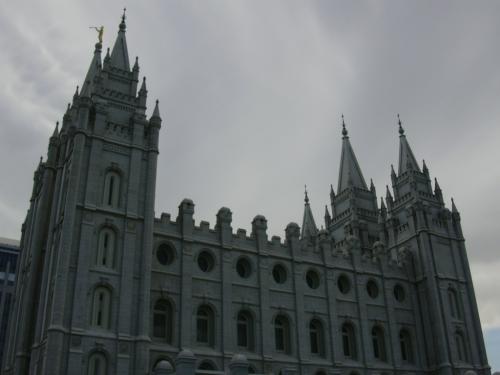 We weren't allowed to go into the temple, since we're not Mormons, but we could walk around on the grounds around. The grounds themselves are beautifully maintained, with lush grass and trees and children playing everywhere. 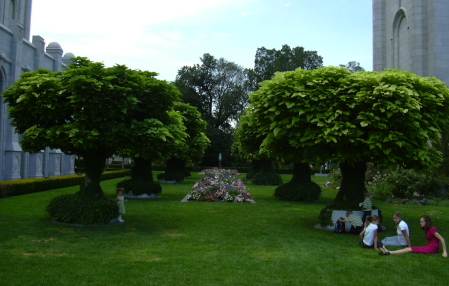 We walked up to the temple to discover that a wedding had just completed, and the wedding party was posing for pictures on the steps of the temple. 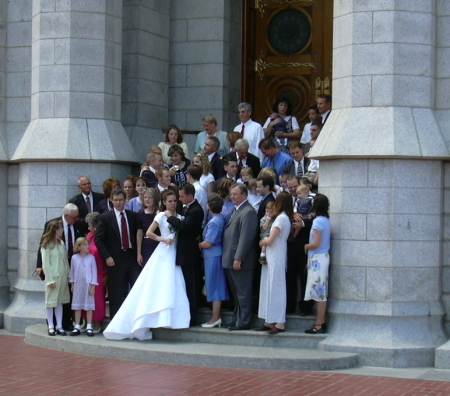 But then we looked around, and we noticed something weird. There were marriages getting ready to occur all around us. There were bride and groom couples everywhere. 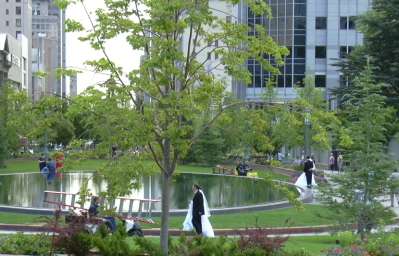 The LDS church places a very high priority on families and marriage and especially children, one of the factors that has helped to make the Mormon faith one of the fastest-growing in the world. On top of that, they believe that marriages last for eternity. Divorce is not really allowed in Mormon families. Therefore, it shouldn't surprise anyone that there were so many marriages going on at the temple. I'm sure it's like this every single day of the year.

We entered the visitor's center and looked around. It was pretty interesting, with a history of the building of the temple and artifacts from the era. I was particularly taken with an animatronic Joseph Smith, the founder of the LDS church. 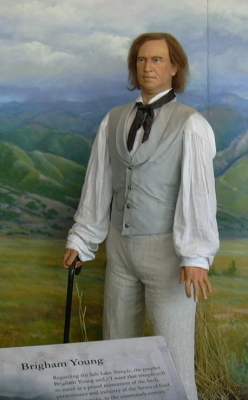 The best part of the visitor's center was the computers connected to http://www.familysearch.org. We could look up our ancestors and get genealogical information, which we could then print out. The Mormons have the largest genealogical database in the world. Why? Again, because family is important to them, but also because they believe that you can baptize dead people into the LDS religion. Find out your dead relatives names, and then baptize them as Mormons. Needless to say, this has antagonized a lot of people. I did, however, find out a lot of excellent information about my father's side of my pedigree, the Grannemans. I actually traced his side of the family back nine generations, to 1720! That was really exciting to me, and it made the trip worthwhile (http://www.familysearch.org is usually impossibly busy if you try to access it over the Web, so the direct access provided by the LDS temple was much appreciated).

We left the temple and started to head back to the van. Along the way, we passed by the LDS Conference Center, which was also huge. 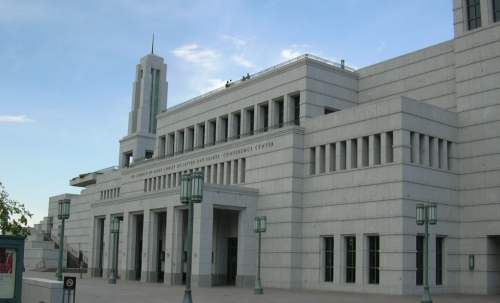 We passed by the Conference Center and crossed the street. I looked down the street, and I saw what makes Salt Lake City so weird. You've got this very developed city, and lots of greenery, but then immediately outside the city is a wasteland of desert. Salt Lake City is like an island in the midst of nothing, and I think that the geography fits in nicely with how the original Mormons must have felt as they began to create their city, that they were creating a holy stronghold in the midst of a sinful world. Interesting, the juncture of geography and mindset. 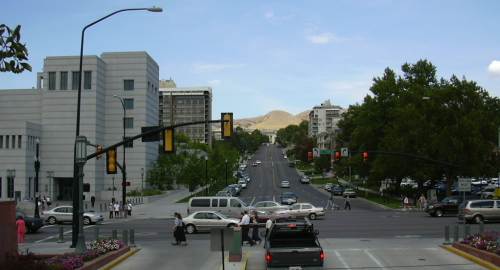 Right by our car was a house, a magnificent house. I hadn't seen it when we parked because it was behind us, but I sure saw it now. It was amazing, rising majestically on a hill, with its brick red and brown and orange against a blue sky. I don't know if it was owned by the LDS church, but it wouldn't surprise me. 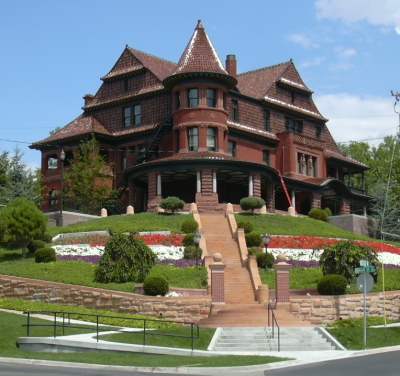 From Salt Lake City we drove through Wyoming, heading for Laramie, Wyoming, which was an enormous distance away. Along the way we saw another one of those enormously long trains making its slow, deliberate way across the land. I've always loved trains—they're such romantic reminders of a whole way of life that has by and large passed along, although I always ride the train whenever I can—and this trip has really given me a lot of enjoyment whenever I have seen any of those wonderful trains. 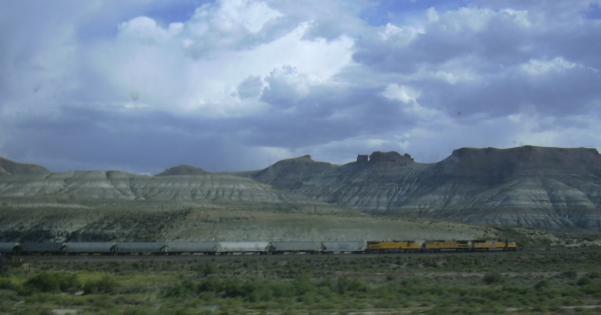 The backdrop of this particular train was just spectacular. Those hills and those clouds framed the journey of the train, and I ached to be with it as I saw it pass. Where was it going? How long had it already been rolling? What were the men on that train seeing, and how did the world look to them as it passed? Questions arose for which I had no answers. And then the train started to disappear, heading off into the distance, never to be seen again by me. 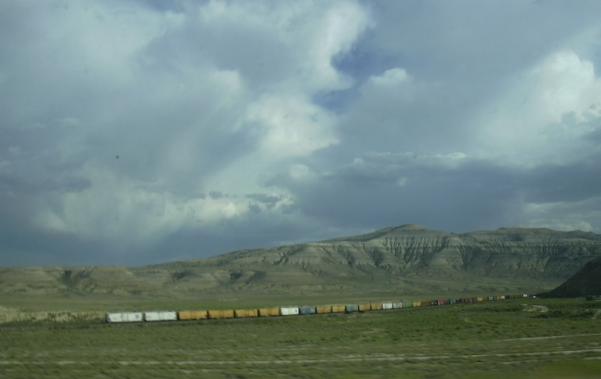 We didn't reach Laramie until it was very dark. The gas station was also a full bait and tackle shop as well. We could buy fish eggs or nightcrawlers or crickets. I didn't need any of those things, but it was heartening to know that they were there.

Originally we had planned to stop in Laramie and see Matthew Shepard's grave, but it was late and dark and we had to drive to Denver still. This was a big disappointment to me. Matthew Shepard's murder touched me more than I can express, and the play based on his death, "The Laramie Project", was one of the best and most moving plays I've ever seen. I'll just have to make it back to Laramie some day and pay my respects.

From Laramie we drove to Cheyenne, and from Cheyenne it was only a hop, skip, and a jump to to Denver, where Denise's brother Mark and his two kids live. Before we could go to Mark's, though, we had to drop off David with a friend of his. He would stay with his friend in Denver while we stayed with Mark. It was about midnight or so when we finally arrived at Mark's, and we were glad to be there, as we had been driving for about 14 hours. Mark was glad we'd arrived too, since it turned out he'd been up since 4 a.m. We hung out for a while, and then got into bed. Our long day had finally ended.