Denise and I awoke early today, because we wanted to get on the road and back to Missouri. We weren't going to go all the way to St. Louis; instead, we planned to drive to Marshall, Missouri, my home town. Then, the next day, we could drive the three hours to St. Louis at our leisure.

Before we left, we posed for a picture with Mark's kids. They really are two great people, and Mark has done a great job raising them. 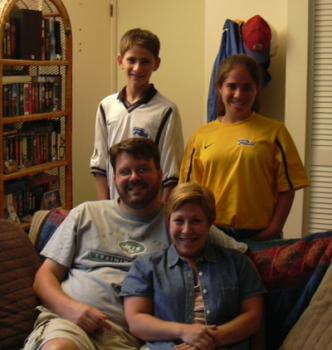 Rachel was dressed in her soccer uniform because she was leaving in about ten minutes to go play soccer again. I found out something interesting about Rachel right after we took our picture: she doesn't like having her picture taken! When I tried to snap another shot of her in her chair, she made it difficult, to say the least.

Thanks, Rachel! Of course, Aaron, ever mellow, just hung out and watched TV, while his sister was screaming and writhing to avoid my camera. 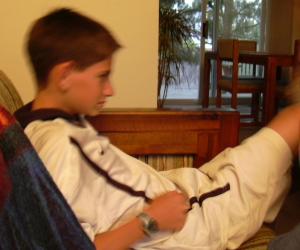 We gave everyone their gifts, which they all liked. I must say, I gave Aaron something very special: a naughty pooping horsey. He loved it, as did Mark. I knew they would!

We left Mark's house. He was a great host, and I really enjoyed getting to hang out with him over the last couple of days.

We now had to pick up David at his friend's apartment. Along the way, we noticed a panhandler with an interesting sign. 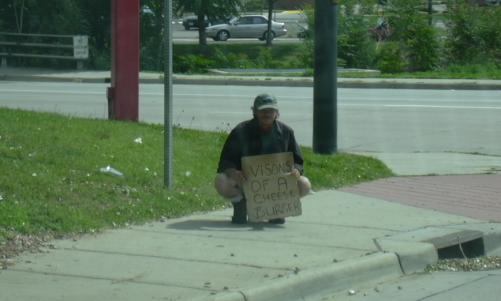 We picked up David, and immediately began driving east out of Denver. Along the way, he told us about all the fun he'd had without us over the last couple of days: shopping, fine dining, bars, champagne in abundance, and meeting new friends, especially a magician (for seriously) who did some really amazing tricks. It sounded like he had a ball. We were glad to have him back, though: we missed him. He's a great traveling companion.

After driving for a bit over an hour, we decided to stop for lunch in Byers, Colorado, at the Country Burger. Fortunately, they had garden burgers, too, so I could enjoy a vegetarian hamburger. It actually was a pretty good meal.

Unfortunately, on the way out of town we ran into the main drug dealer of Byers, Colorado. Worse, I found out that my wife, Denise, is a pusher for this drug dealer. Denise was interested only in satisfying her own physical addictions, and in addicting David and I as well. I am ashamed to report that she succeeded. 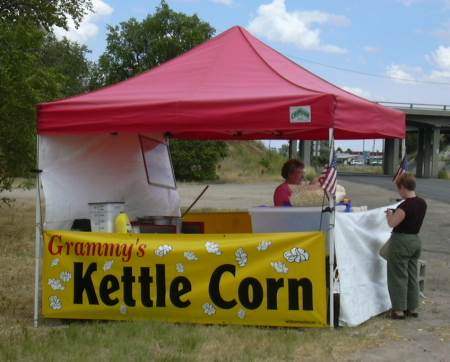 Of course, I am talking about the woman who calls herself "Grammy". Sure. "Grammy." A likely name. She hides her little satanic business behind the name of "kettlecorn", when obviously that stuff has been laced liberally with crack. You take one little bite, and you are helpless to remove the kettlecorn monkey off your back. Suddenly, you have a jones for kettlecorn that nothing will satisfy but MORE KETTLECORN. You start out thinking, "Oh, I'll just try one bite", and the next thing you know, you awaken in your underwear, with little kernels all over the floor and seat of the car, and an empty giant plastic bag next to you. And you know what you think about when you wake up? "God, I need more kettlecorn!" It's a sorry, sorry existence.

On we drove. On and on and on and on. Into Kansas. Ah, Kansas. 450 miles wide, but it might as well be inifinity. Want to know what you see while you're driving through Kansas? Here's what we saw out of the left side of the car for 450 miles:

And here's what we saw out of the right side of the car. For 450 endless miles.

There was one break in the monotony. A train! Yes, a train that actually was quite close to the car.

We saw the whole train, from beginning to end. It was the last train I saw on the trip, and I guess it symbolized something, that the end of our adventure was nearing. I watched the train leave, and I waved goodbye.

We reached Salina, Kansas just before sunset so we could eat dinner. We ate at the Flying J, which is a truckstop. Of course, it offers a buffet. Parts were great, like the mashed potatos (real) and chicken (according to David and Denise), and parts were not, like the vanilla ice cream, which was yellow instead of white, and tasted so processed and fake that I put it down after one bite. Yuck!

During dinner, something happened to Denise. She went completely insane. It all started when David and I were talking about how great the mashed potatos were, and I suggested that he create a diversion so that I could grab the entire mashed potato tub from the buffet and take it out to the car. And then, out of nowhere, Denise said in this really deep, countryish voice, "We'll be driving across Kansas with a bucketful of taters."

David and I just stared at her, dumbfounded. And then she began to crack up. Just laughed and laughed and laughed. Tears were streaming down her face. She couldn't really speak. She would just shake, and laugh, and wipe her eyes, and then laugh some more. She had cracked herself up. I just looked at her with my mouth open, which made her laugh all the harder.

Finally, she stopped. "OK, I'm done." Short pause. "Bahahahahahaha!" And it was off to the races again.

This happened at least five times during dinner. I think it was the damned kettlecorn.

One more detail from dinner. Our waitress was the sweetest waitress I have ever had. Really, really nice, with a genuine smile and a very helpful manner. During dinner, she stood and talked to us. I was curious about Salina, having grown up in a small town, so I asked, "How many people live here?" Pause. Longer pause. Finally she answered: "Well, I never thought about that."

When we walked outside, the sun was getting ready to set, and the sky was showing off all her colors in this otherwise flat, nondescript landscape. And notice the jet trails up in the sky. I've seen that sunset many times, and I was beginning to feel like I was coming home. 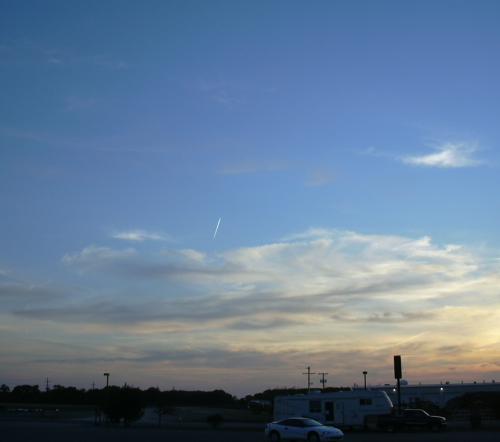 We hit Missouri at 10:50 p.m. Making good time, we hurtled onward for Marshall. We reached it at around midnight. We had a couple of drinks of hard cider, and I gave David a tour of my Mom's house. In my old bathroom we found a large, brown spider with a dark violin shape on its head. I grabbed a glass and trapped the spider. Normally I don't kill spiders, since they eat bugs, but this one was a Brown Recluse. For those of you who don't know, the bite of a Brown Recluse can cause necrosis, in which the skin turns black and rots in about a one-inch diameter area around the spider bite. Brown Recluses, in other words, are nasty little beasts, and I was glad to trap him so my Mom could see him and set off a spider bomb to kill any of his compatriots. By the way, Brown Recluses are unfortunately common in Missouri, so you always need to keep an eye out for them. David was very glad we caught this one, since it turned up that he's afraid of spiders. Ooops. After our little zoological expedition, we sat down in the family room to watch some TV. We didn't realize it, but it was suddenly 3 a.m. and time for bed. David slept in my old room, and Denise and I slept in the ghost room. I was home in many ways.