I fell asleep last night around 2:30 am, since I stayed up reading my book. At a little after 8 am, my cell rang. Wha? Whozat? Denise? "Hi, Scott!"

Denise: Hey, I just wanted to remind you that you're going to change timezones when you drive into Michigan.

Denise: And the B&B I'm at in Hart is across the street from a BP gas station. OK?

Click. When we awoke about an hour and a half later, we performed our morning ablutions, including Libby's, packed the van, & took off. David was still half asleep, evidently, since we drove 30 miles north, towards Chicago, pulled into a gas station, got some gas, pulled back onto the highway, & then realized 20 minutes later that we were going the wrong direction. As in, "Hey, isn't that the Joliet Inn that we slept at last night?" Oops. We turned around, & David looked at me & said, "OK, hand me one of those cold Doubleshot Espressos". I did, he drank it, & then about 45 seconds later he was WIDE AWAKE, MAN! WOW! Doubleshot Espressos will do that to you.

We made our way towards Chicago, listening to podcasts of NPR's Science Friday that I had collected. Every once in a while, David would get indignant at something someone said in a podcast, & begin to angrily argue with the voices on the car's speakers. He didn't get a response, although he did receive an occasional grunt of agreement from me. I worked on the book, writing writing writing.

We arrived in Chicago around noon & headed straight downtown. Cruising down Lake Shore Drive, we marveled at the glory that is Chicago. I've been there probably 20 times, & I never get tired of LSD, the gorgeous views, the mass of people, the activity, the water, the park, the constant movement & life & motion that is Chicago's downtown. After driving in & around the Magnificent Mile for a while, we stopped at a parking garage just off State Street on Russell. By this time, we needed food, & I needed to find a wireless Net connection. Border's!

So across the street we went, into Border's. I've been in that store many times, & it's one of my favorites. For a chain book store, it's big, comfortable, & inviting. I immediately went upstairs into the computer section, found a clerk, & asked him if they had Don't Click on the Blue E!. The clerk looked on the computer, & told me they had one left. "Ah," I said, "Good. I wrote it!" The clerk looked at me, said "Cool!" and then asked me if I wanted to sign the book. "Sure!" I mean, who wouldn't? While I signed, he found a sticker to put on the book indicating that it was autographed by the author & would not cost 20 more dollars. How utterly neat! David snapped this pic of me with my book, just before signing it. 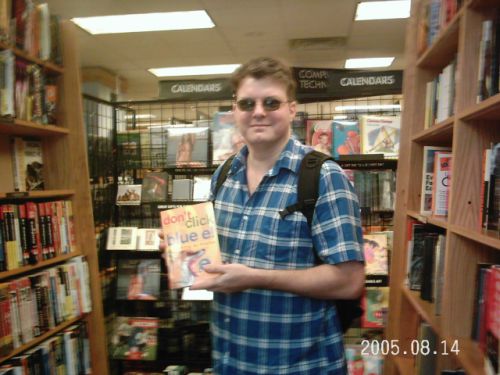 Leaving the scene of my celebrity, we found some books on Canada, settled into the cafe for lunch, and I worked on our trip journal while David read. I had to sign up for T-Mobile's Hotspots to do so, which was OK, as I figured I'd use it over and over again on our trip. But my Gad, it was slooooooooow. Soooooooo slooooooooow. Painful, man, just painful. But I was patient, & I uploaded the first day. And then it was on to our next destination: the world-famous Field Museum of Natural History.

I'd been to the Field several times, but this was a first for David, which was really fun. As we walked up to the Field, I got more excited. I just finished reading Bill Bryson's A Short History of Nearly Everything, which covered a lot of science & history about, uh, natural history. I was ready to see some of the stuff I'd been reading, & impart some of my newly gained knowledge to David, whether he wanted to hear it or not. On our way to the Field, we were joined by a big crowd of folks, including several sailors. 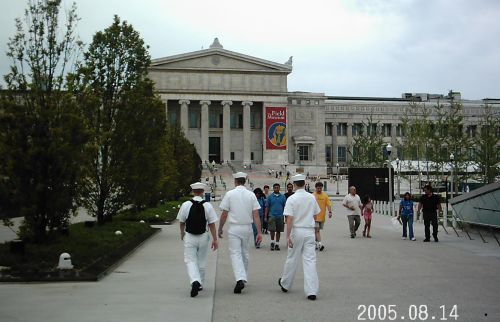 Admission to the Field is usually $20 or so, but I got in free since I'm a kollege perfesser! Sweet! The main lobby of the Field is awesomely huge, with two elephants, several dinosaur skeletons, a vast roof, & people milling about everywhere. This picture is taken from the opposite end from the entrance, but it gives you the idea. 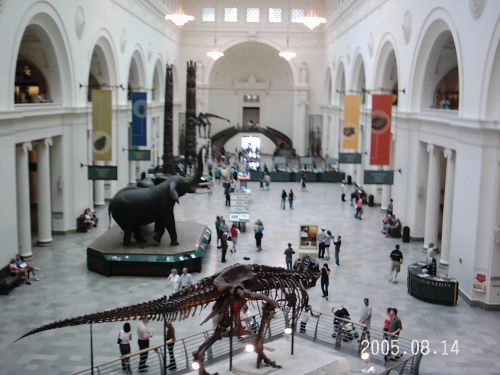 As I said, there are several dinosaur skeletons in the lobby. As a former little boy (some would say not so former), I of course LOVE dinosaurs, so I had to go check out the skeleton. Well sirree, I was in for a treat, because the skeleton the Field had out for display is none other than Sue, the largest & most complete Tyrannosaurus Rex skeleton ever recovered. How'd you like to see that looking at you hungrily? 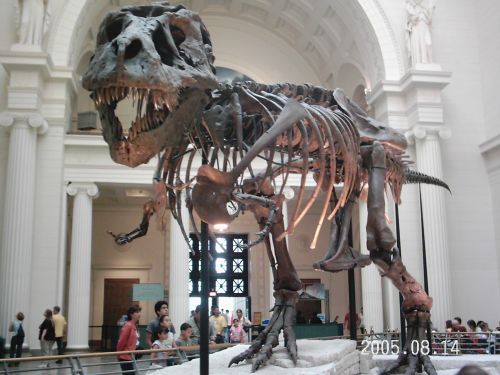 She would have had 58 teeth, some of which were a foot long. IIRC, she was also about 42 feet long, & it appears that, yes, she could run. The little boy in me says, "Cool!" I was even more impressed when we walked over to the skull. Yes, I know you can see the head in the complete skeleton, but that part's fake, because the real skull is too heavy to display that way. So that's a fake head, & the real skull is in a case nearby. So, above is the T-Rex skeleton, including faux skull, & here's the genuine skull, which is truly an awe-inspiring site. 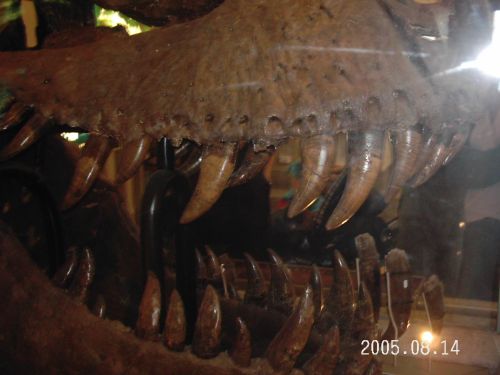 Also on the scene was the skeleton of a Mamenchisaurus, a large plant-eater that lived about 156 million years ago. This particular skeleton was found in China. David was kind enough to take a movie of the length of that very big beast's bones for your enjoyment.

Next stop, Egypt. Again, the little tyke in me was quite happy, since what youngster doesn't like mummies nearly as much as he likes dinosaurs? (If they'd had exhibits about detectives and firemen, I would have completely regressed to a 7 year old!) Before we actually saw the mummies, we saw a kind of pre-mummy. 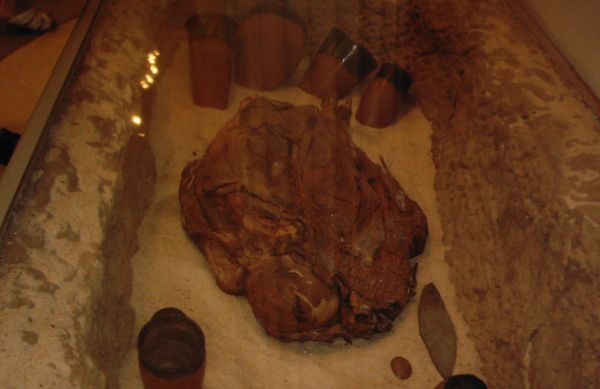 This woman was placed into the fetal position (symbolizing death as rebirth?), wrapped in woven reeds & fur, & then buried in the Egyptian sand about 5500 years ago. She was obviously not mummified. So why's she in such good shape? The heat & dry sand worked their magic, in effect mummifying her naturally. Later the Egyptians developed the mummification process that we learn about in school. In particular, my favorite part has always been how they placed organs in 4 different Canopic jars, each capped with the head of a different Son of Horus, but the brain they dragged out of the skull through the nostrils using a small ladle, & then threw away. They didn't think the brain did anything of value, so it was useless to them & discarded. Neat!

Next were the gems, an exhibit that David really wanted to see. Gorgeous they were, & the room was unbelievably crowded. People slowly walked around the glass-enclosed display, drooling over the beauty within, & trying to find the stone representing their birth month. I heard the folks around me excitedly pointing them out to their friends & family. "Hey, there's me! March! Aquamarine!" "Look! The emerald, for May!" "Oh, yeah? There's the diamond, for April. That's mine!" I looked for my birthstone—Craptarium—but I couldn't find it. Man, the Field Museum really let me down there.

We walked across the hall into a display specifically about the use of Jade in China. Wow. I had no idea that Jade came in that many different colors, or that it could be used in that many different ways. In particular, as a computer nerd interested in security, I was struck by a pair of matching tallies, about 3 inches long or so, from the Han period (206 BCE—220 CE). The Emperor had one, while his general had the other. When a messenger was dispatched from the Emperor to the General, he would carry the Emperor's tally to match against the General's, in order to authenticate the veracity of his message. Good idea.

After minerals, it was time for animals again. Stuffed animals, to be precise. We saw the Komodo Dragon, which made me think of Billy Bob Thornton's famous statement regarding those creatures: "More than anything on this earth, Komodo Dragons are the creature that represents evil. If it were up to me, I'd just shoot those sons of bitches." Uh, yeah. Sure.

The coolest, most interesting animals were, without a doubt, the famous man-eating lions of Tsavo. In the late 19th century, British colonialists were trying to build a railroad through Africa, when they ran into a serious problem: two lions developed a taste for human flesh, & over the course of many months, they killed & ate 140 native workers. Finally, a British hunter shot & killed the two lions, & the Field eventually acquired the carcasses. Yes, they were big, & they looked fierce. If you want to learn more, the movie The Ghost and the Darkness (which I haven't seen), is about this famous incident. 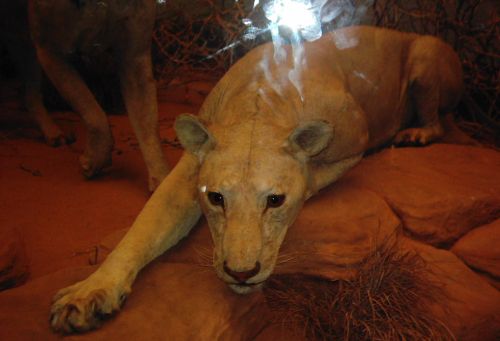 David later told me that he took the picture to inspire his new kitty Chloe, so she would perhaps maul David's boyfriend Charlie. Watch out, Charlie!

It was nearly time to leave, so David & I wandered back into the main lobby area. On our way, we stopped to look at two enormously tall Native American totem poles. 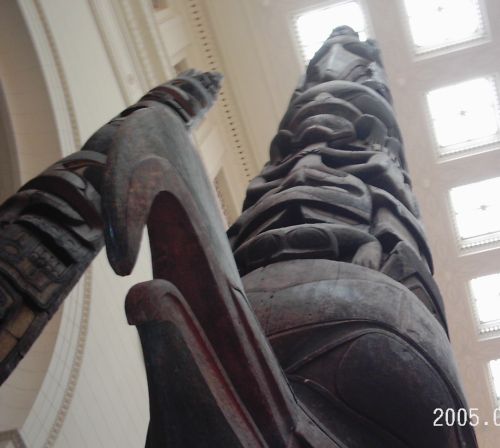 The one on the right actually went above a doorway. How'd you like that to decorate your house? That would be pretty dang cool! David again took a movie of the totem pole, panning from bottom to top. Thank you, David!

It was 5 o'clock, & time to leave. Besides, we still had to drive 3 hours or so to Hart, Michigan, where Denise was waiting. Before we left Chicago, however, I had to retrieve Libby out of the car & give her ear medicine. The day before, Ken the vet diagnosed her ear with a yeast infection, so I'm supposed to put goop in her ear once a day & really work it in. Here I am, hard at work on Libby. You can see she loves it. 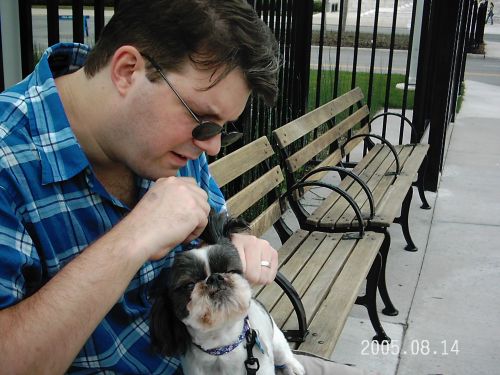 And then we reached Denise's B&B in little bitty (population 2600) Hart, Michigan. Yay! Denise was glad to see us, I was glad to see Denise, Libby was overjoyed & wiggled uncontrollably to see Denise, & David was glad to see the bathroom. But that wasn't the end of our night! Oh no! Denise wanted us to drive 15 miles or so to another small town, Pentwater, to hear a jazz band. David & I weren't sure we wanted to do it, but we went at the urging of Denise. And we were glad we did. Denise was totally right—the band was great, the food at the restaurant they were playing at was nourishing & tasty (crab legs … mmmmm), the beer was cold & refreshing, & the weather was actually kind of chilly.

Here's Denise & our radioactive dog Libby & me on a dock at Pentwater. The happy family reunited. And doesn't Denise look cute in her Music Festival hat? 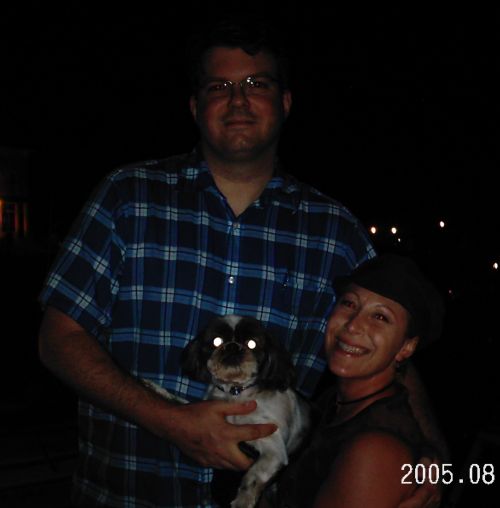 Also on the dock was the fattest, happiest spider in the world. 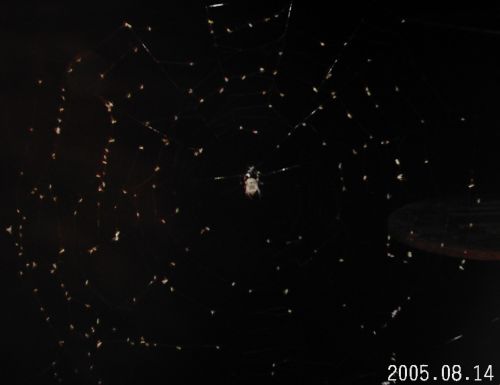 Look at that spider, sitting in the middle of his web at the end of the dock. Each of those little bright specks is a different bug caught in that web. There were so many bugs that the spider wasn't even bothering to move or even wrap them up any longer. I'd never seen a completely satiated spider before, but here was one. When it comes to prime spider real estate, this guy was Donald Trump, & then some.

The band ended, & it was time to drive back to Hart & the B&B. Ahhhh … bed. I read a bit more in bed that night, but then sleep overtook me by 2:30 am. I slept hard, glad to be back in bed with Denise, although our traitorous dog slept at the foot of David's bed. Better remember who feeds you, Libby!