We awoke Monday, refreshed from a good night's sleep, to the sound of Kelly preparing breakfast. After getting ourselves ready, we sat down to a yummy repast, including juice, coffee, fresh fruit, fried eggs, & famous Montreal bagels, which were deserving of their fame. All very good. Kelly's a good cook!

We packed up our stuff in the van & said our good-byes to Kelly. He was a great guide, an excellent host, & a good friend. Kelly, thank you, & we look forward to repaying the favor when you come to visit us in St. Louis!

Shortly thereafter we were crossing the border back into the USA. I really loved Canada—the land, the people, the cities—& I look forward to going back. As far as I'm concerned, the sooner the better!

Getting back into the US was easy. We were asked a few questions, displayed our passports, & that was it. Once again, Libby was a non-issue. Still, I'm glad I was prepared, with shots & papers, as the alternative would have sucked.

On we drove, our destination New York City, the greatest city on the earth. I'd been several times & couldn't wait to get back, Denise had been before too, but this was David's first time, so I was looking forward to seeing the City through his eyes.

It's basically a straight shot south from Montreal to NYC, & about 7 hours of driving. We stopped at Lake George for a mid-afternoon lunch. Lake George is one of those small resort towns in upstate New York that are packed during the summer, & this was no exception, especially since the weather had finally banished the heat wave that had oppressed everyone for the last few weeks, leaving us with cool temperatures & refreshing breezes. Maybe we just brought the fantastic Canadian weather down with us!

Lake George was busy this afternoon, as you can see. 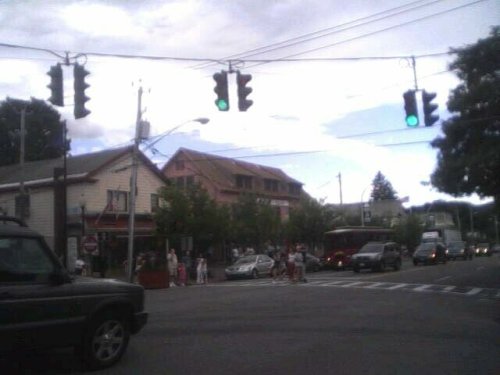 We stopped the car on Main Street & got out. Immediately we heard the theme from the X-Files play, which was weird. Then we found out that we'd parked right in front of a store that had something to do with alien visitors or somesuch. OK, that explains the X-Files.

We procured our food & drinks out of the cooler & leashed up Libby. Right by the Lake were several picnic tables with our names on them. We sat at one, making sure that all three of us were facing the water, & had a delightful lunch. Here's what we saw from our seats. 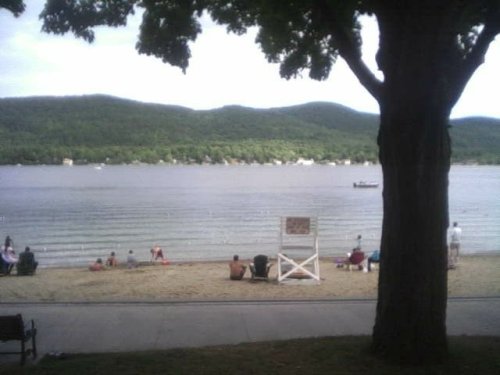 There were paddleboats lazily circling back & forth in front of us, which made us kind of feel like we'd gone back in time. 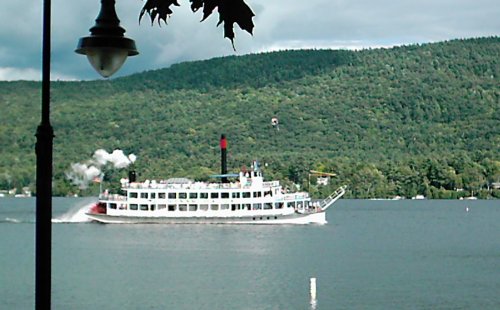 Here Denise & I are, enjoying our picnic. 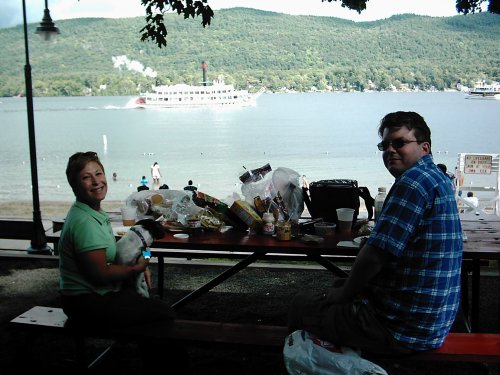 David took a movie of our setting, with paddleboats, kids playing & swimming, & Denise & I eating. It was about as pleasant as one could ask for.

Libby was a good girl during our meal (we fed her too), but I caught her looking up at me with that underbite, tough girl look she gets sometimes that always cracks me up. 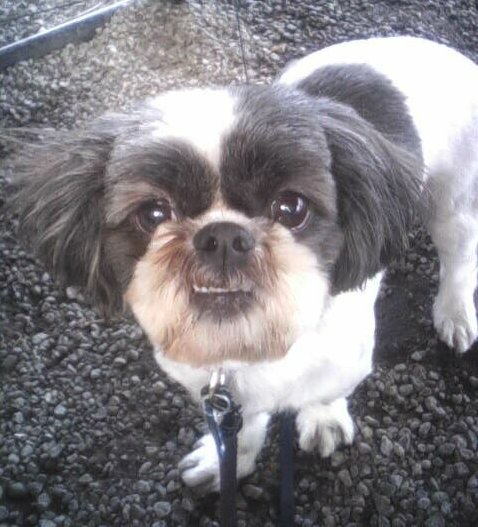 We finished our meal & headed back to the van. Along the way, Libby made a little friend! Much sniffing ensued. 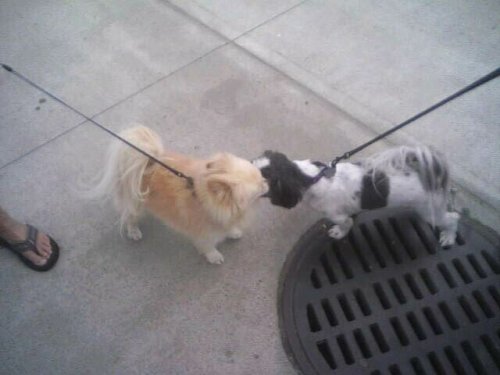 Back in the car, & we continued our drive through the beautiful Catskill mountains. Denise's very cool cousin Katie was out of town, but she volunteered her apartment on the Upper West Side to us, which helps make Katie rise from very cool to super-duper cool. There was one catch, well two, actually. First, we didn't have keys to Katie's building or apartment. However, her neighbor J had a set so she could water Katie's plants. I had J's number, so I called her. By this time, it was getting close to 10 pm, & J was going to sleep soon. We weren't going to arrive in NYC until 1 am, so that was a problem. Finally, we hit on a reasonable solution: J would leave the keys with the owner of a nearby bodega, & we would get the keys from him. Perfect! Thanks for the quick thinking, J!

Second issue: the van. I sure as hell wasn't going to park a van full of goodies on a Manhattan street (what are you, nuts?), & I also didn't feel like paying Manhattan parking garage fees (what am I, a millionaire?). The solution: leave the van at my brother Gus' house, on Long Island, & take the train into the City. This meant that we had to meet Gus at the New York Jets complex, where he works cleaning toilets (just kidding—he's the Assistant Equipment Manager), follow him to his house, have him drive our van to the train, drop us off, then leave the van at his house. The train left Long Island at 11:30 pm, so we had to get situated before that.

David drove like a bat out of hell, & we arrived at the Jets complex at about 10:40. That gave us 15 minutes for a quick tour. Denise & I had seen it before, back in 2002 (see our trip journal!), but it's always cool to see it again, & David loved it. We saw all the highlights: the main equipment room, the players' locker room (hoo boy, does that smell like manly sweat!), 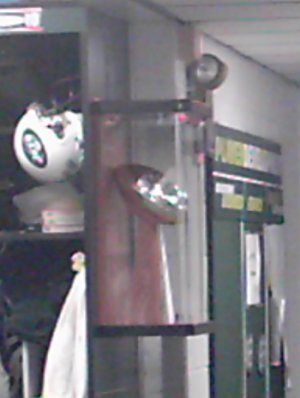 … the football helmets (which Denise & I both tried on) … 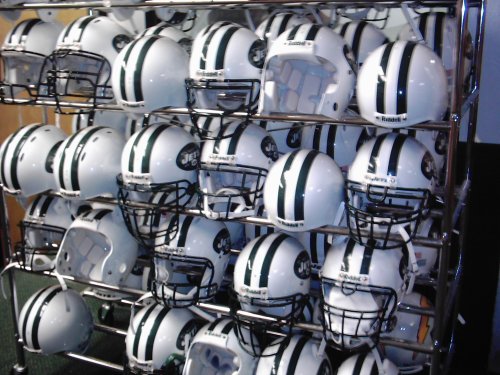 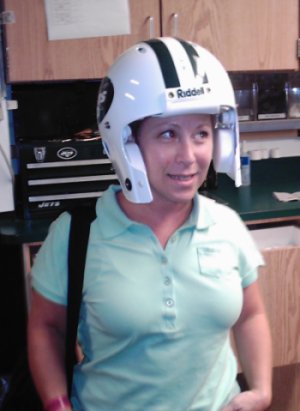 … & my favorite item: The Stick. Gus & the other equipment guys use The Stick to grab shirts that are on high hangers. It's an important—no, vital!—no, absolutely essential!—object of adoration used by the Jets equipment room dudes. Without The Stick, they would be utterly helpless & adrift. Gus was kind enough to let me touch The Stick … but only while he held onto it. I was honored! 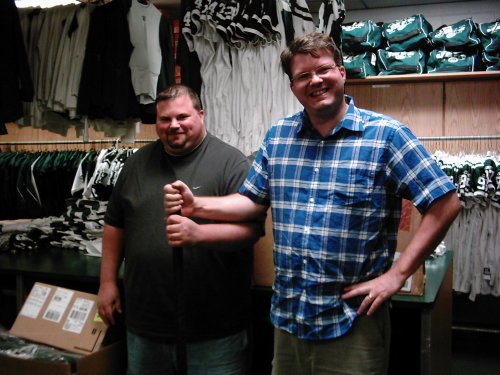 Denise was getting nervous, so we following Gus as he drove back to his house like the hounds of hell were chasing him. I forgot to mention much earlier that I brought walkie talkies with me on this trip, & they have proved invaluable. When David & Denise went someplace & I went another, we could get each other via walkie talkie. When we followed Kelly to his apartment, we gave one to Kelly, so we could talk to him as he drove. Now we did the same thing to Gus. It's incredibly handy, & I for one hope that their usefulness proves to Denise that I should be allowed to buy any new toy that I think I need. In fact, when I ordered the walkie talkies, Denise said, incredulously, "Why in the world do you need walkie talkies?" My reply: "Because they're cool, & because they'll come in handy." This didn't convince Denise. "When?" she asked. I said the only thing I could: "I don't know when, but they will!" So ha! The walkie talkies were great! Now let's talk about that electronic lock picker I've been wanting …

Once we hit Gus' pad, we had to go inside for the 5 minute tour, since I'd never seen his new house. Overall it's great. He's working on it in many places, & once that's done, it will be a very nice home, worth a lot more money. Good pick, Gus!

Back in the van, we drove to the Deer Park station. We bought our tickets, waited a few minutes, heard the train whistle, said our temporary good-byes to my wonderful brother, & stepped onto the train. We had a ride ahead of us that would take a bit longer than an hour, so I pulled out Don Quixote& knocked off quite a few pages. Libby was a good girl & rode quietly in her carrier next to me. Yes, we brought the dog to New York City. She goes where we go. Besides, every shih-tzu should see New York City at least once in her life!

Finally, close to 1 am, we pulled into the storied Penn Station. Even though it was 1 am, the place was still swarming with people, walking everywhere at top speed. Keeping our bags close, we stopped in a pizza place & each ordered a slice of mmmmmm … good New York pizza. We hadn't eaten since lunch at Lake George, & we were famished. The pizza tasted great, & afterward we walked through Penn Station, finally exiting to hail a cab. The whole time, David & I were talking in our best New York accents, liberally sprinkled with the F word, in an attempt to fit in. Denise was not happy. "What's with the potty mouths?" To which, of course, we replied, "What da fug is your problem?" Except we didn't say "fug". You figure it out.

Finally we pulled up in front of Katie's apartment. I walked into the bodega, greeted the owner, asked for the keys, & received them. I tried to tip him 5 bucks, but he wouldn't take it. Refused it, in fact. Wow! Katie, you must now shop there forever. That man is a saint.

Katie lives in a fifth floor walk-up, which works out to 70 steps. I counted. We ended up walking up those stairs at least six times a day.

Holy mutha of God! That's a lot of steps! Believe me, about the middle way up, you could feel the burn coursing through your legs. Now I know why Katie is so lithe & fit.

But I have to say, Katie's apartment is beautiful. It's tiny, of course—about the size of our family room in St. Louis—but she's decorated it tastefully, there are books everywhere (yay!), she's used her space brilliantly, &, best of all, she has a balcony/deck. Ohmigod but it is a treasure. That balcony is the ace in the hole for that apartment. If I lived there, I would be on that thing every morning & every evening, without fail. Love it love it love it.

And there we were, soon enough—on that balcony, enjoying the sights & sounds of New York while we drank in some wine, glad to be here in Gotham. Since we were tired as heck, though, we didn't spend a lot of time out there. Within a short time, we were in our beds, fast asleep to the constant lullabies of sirens, shuffling feet, and the occasional shout on the street.